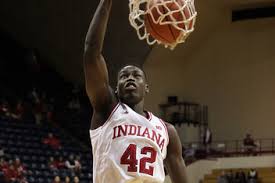 Moments like this were few and far between for Peter Jurkin. In fact, in two seasons he never made a field goal in only 18 minutes of play.

Just two days after rolling out the Indiana University’s athlete’s bill of rights, yet another basketball player’s scholarship will be recovered by the program that stumbled through a 17-15 season, ending minus a postseason tournament appearance.

The explanation for Peter Jurkin’s transfer from Indiana University’s basketball team was that he wanted more playing time.  That’s usually at the root of a player’s decision to play elsewhere, so it wasn’t a surprise.

Why he felt that more minutes couldn’t be had with the Hoosiers is a valid question as he is one of only two returning players with the size to play the pivot.  A victim of recurring injuries, Jurkin’s minutes have been sparsely awarded through his first two seasons, but if healthy he would have been a nice tool for coach Tom Crean.

Evaluated individually, the abandonment of players from the Hoosiers is easily explained.

Austin Etherington was able to gain immediate eligibility at Butler – the program for which his father played.  Etherington never appeared a good fit in Bloomington, and enjoying his final season of college hoops at Hinkle Fieldhouse makes sense.

Jeremy Hollowell’s move to Georgia State to play with longtime summer teammate R.J. Hunter for coach Ron Hunter was similarly sensible.  Hollowell wasn’t comfortable at IU, and was a mistake in recruiting.  Playing system basketball is not a lot of fun for Hollowell, and after two years of slogging through that unpleasantness, he decided to move on.

Jonny Marlin transferred from Indiana despite playing a little bit as a walk-on.  He’s a solid player, but behind a roster filled with guards he was destined for a good seat for games and a ton of work on the scout team if he stayed.

Joe Fagan is pursuing an education that he would like to see end in medical school, and basketball is a serious time eater.  Another walk-on, Fagan making education his priority is a solid explanation for bolting.

Noah Vonleh leaving for the NBA is the most justifiable of all reasons to jump ship.  Making it to the NBA as quickly as possible has always been Vonleh’s goal.  He didn’t re-class to leave high school a year early because he was in a big hurry to play in Assembly Hall.

Those five who have left the team combined with the four graduates (Evan Gordon, Will Sheehey, Jeff Howard, and Taylor Wayer) leave the Hoosiers with seven returning players from a team that can be generously described as mediocre.

Transfers aren’t inherently bad for a program, but when they occur in such bulk, questions about the direction of the program are justifiably asked.

The positive of Jurkin leaving is that there are now two scholarships available for the very talented 2015 class.  The bad news is that the Hoosiers will have only 11 players on scholarship, and no senior leadership for a season where Crean needs more than the 17 wins earned last season to quell the increasingly persistent chatter among reasonable alums and boosters about the potential for a coaching change.

From the outside looking in, the work done to rebuild the program after Kelvin Sampson and Rob Senderoff did their level best to destroy it appears to be unraveling.  It’s possible that a lineup consisting of a combination of Ferrell, James Blackmon Jr., Troy Williams, Stanford Robinson, Robert Johnson, Devin Davis, and Mosquera-Perea could achieve significant success.  There is also a chance it can’t.

Indiana Basketball is at a crossroads.  The mass abdication by undergraduates might have a positive result, but that doesn’t necessarily resolve the questions of why so many players are willing to walk into Crean’s office to announce their intention to quit on their dream of playing in Bloomington.

While the work by Crean needed to re-boot the Hoosiers program in 2008 was Herculean, getting the wheels back on the rails in 2014-2015 may be an even tougher challenge.