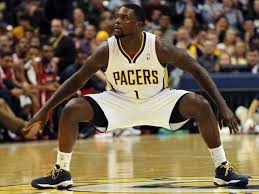 Lance Stephenson may have received the best offer he’ll get from the Indiana Pacers.

Free agents have come off the board one by one, and now Lance Stephenson is among the best remaining along with Phoenix Suns point guard Eric Bledsoe and Detroit Pistons big Greg Monroe.

Too much has been made of Stephenson’s antics – the blowing in LeBron James’ ear, the collapse on the floor after a flop against the Heat, and the galloping and cavorting around Bankers Life Fieldhouse to celebrate personal glory.  Too much has also been made of the “grit” and “attitude” Stephenson brings to a team lacking in both.  The truth is that for as many defensive possessions as Stephenson put his face in James’ and Dwyane Wade’s chest defensively during the Eastern Conference Finals, there were just as many where he was a passive witness.

Instead of relying upon our eyes that recall moments captured on camera and repeated ad nauseum during endless Sportscenters, let’s talk about a statistic that ignores whether we like or dislike a player (and for the record, I like Stephenson).

Advanced metrics suggest strongly that both Bledsoe and Monroe are significantly more important contributors than Stephenson.  Bledsoe (19.77) and Monroe (18.23) sport high end player efficiency ratings (PER) – much higher than Stephenson (14.72).

PER is a complicated but accurate formula that measures the effect a player has on a game per minute.  A score of 15 reflects the league average, so Stephenson falls just below that mark.  Of fellow free agents who measure beneath the perfect median for the NBA, Jodie Meeks (14.79) signed a deal with the Pistons for three years and $19 million, Shaun Livingston (14.52) will earn $16 million over the next three years with the Golden State Warriors, and Patrick Patterson (14.57) earned a three-year contract worth $18 million to stay with the Toronto Raptors.

Sure, Stephenson led the NBA with five triple-doubles, but those statistically great nights came as Stephenson hunted them down.  He knew precisely where his numbers were relevant to a triple double, which diminishes the accomplishment (although it can be assumed that other players close to a triple double knows where they are too).  Stephenson led all guards with 7.2 rebounds per game, but how many were grabbed from the waiting fingers of Roy Hibbert and David West in an effort to stat pad?

It can be argued that the reported Pacers’ offer of five years/$44 million is an overpayment relative to current contribution (but nowhere near Hibbert, even considering his defensive presence as a rim protector).  Factor in the widely reported disharmony that he causes among teammates, and you have to wonder why he didn’t sign immediately.

In Stephenson’s favor, he may have only scratched the surface of his potential as a basketball player and adult.  He may become a more functional teammate and more consistent positive presence on the floor.  The silly turnovers will likely diminish, the shooting percentage should rise, and the personality should mellow a bit as he becomes 25, 28, 31, etc…

Where better for Stephenson’s talent and quirks to be nurtured than with the Pacers?  If his act has worn a little thin here, imagine how raw less tolerant and more good-natured fans, teammates, and front office personnel might react to Stephenson armed with a fat wallet and less fear of consequences.

From the beginning of this process, there has been little doubt that the best place for Stephenson is Indiana, and the best option at the two for the Pacers is Stephenson.

Click here is you hide your teeth when you smile – Dr. Mike O’Neil at Today’s dentistry can help

Stephenson finished second for the NBA’s Most Improved Player Award, and if there is more improvement coming from the 23 year-old, he is going to put himself in a position to break the bank in five years after he finishes collecting his $44 million.

There are plenty of teams with the cash to offer Stephenson more than the average of $8.8 million the Pacers have on the table, but so far none have put enough out there to satisfy his demands.

Listening to the market is sometimes a pleasure (see Hayward), and sometimes disappointing.  Stephenson needs to embrace his value, and work tirelessly to increase it.  That means better decisions passing the basketball, consistent defensive effort, and less stat padding at the expense of his teammates.