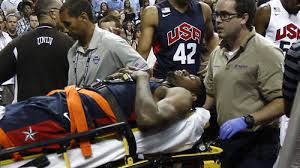 Prior to the horrific injury that will sufficiently rob Indiana Pacers forward Paul George of enough strength and mobility to render him useless for the entire 2014-2015 NBA season, a trip to the NBA Finals appeared a reasonable hope for the two-time NBA Central Division champs.

After George’s lower leg snapped like brittle kindling, the Pacers are now thought to be a team that can contend for a lower tier playoff berth – if everything goes just right.

As stomach churning injuries go, what George suffered Friday night isn’t all that bad.  Arteries were reportedly undamaged, and that means healing will be comparatively speedy – taking 10-14 months.  When good news qualifies as a lost season, you know the injury could have been a disaster.

During last year’s disappointing second half and playoff run, West and Scola were vocal about how the younger Pacers needed to understand how fleeting the windows for winning a championship are.  George and Stephenson have spent the last couple of weeks gathering exactly that wisdom in far more practical fashion.

The two most talented Pacers from a young nucleus that fans expected to lead the team for another decade are gone, and the remnants will try to pick up the pieces and fight for whatever they can get.  Almost certainly, a championship is out of the question, but that’s true for almost all of the teams not playing in Cleveland and San Antonio – if the Cavs can trade for Kevin Love.

So what is left to do for the Pacers but to pick up the pieces and work like hell to make this situation the best it can be?  But how good can the Pacers be without George and Stephenson?  Unfortunately, not so good.  There is just no way to replace the burgeoning productivity and leadership of George.

He is one of the best 10 players in the world, and before Friday night, the sky was the limit.  As for Stephenson, the case could be easily made that his loss represented a net gain.  Rare physical talent times the square root of extreme selfishness equals a locker room in disarray, and fans saw what happened when Stephenson was snubbed by those who named the all-star reserves.  The happy and productive Pacers became miserable and mediocre as Lance decided to assert himself at the expense of his teammates.

The loss of George is obviously different – akin to the Chicago Bulls losing Derrick Rose and the Los Angeles Lakers losing Kobe Bryant.  Not that George is an equivalent player (yet) to Rose and Bryant, but their importance to their teams is similar.

There is no way for the Pacers to compete for an NBA title without George, and expectations should be adjusted accordingly.

Forty-five wins and a six seed would be a hell of an accomplishment.  Then in 2015-2016, the Pacers might have the pieces in place to win.

That’s if George suffers no setbacks and resumes his career where he left off.  For now, the focus for the Pacers has shifted from dreams of raising banners to hopes for their best player to return to where he was Friday night as he flew around the Thomas & Mack Center as one of the best young players in the NBA.