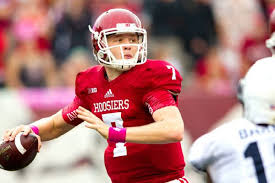 Quarterback Nate Sudfeld is in a unique position to be a change agent for Indiana football.

Winning press conferences is not too tough.  You state your goal, talk about how it will be achieved, and then walk confidently from the room.  Indiana Football coaches have won a hell of a lot more press conferences than games over the past 20 years, but things feel different in 2014.

The level of football that has led Indiana to one trip to a bowl since 1993 has made the Hoosiers the losingest program in college football history, but the players and coaches who sat at tables and shared their feelings about the 2014 season were a little less hopeful and a little more sure of themselves than usual.

We’ve seen hollow optimism in Bloomington for a generation.  Coaches talking about the number of plays that stood between the Hoosiers and great success have been a dime a dozen.  I remember talking to Bill Lynch prior to his final season, and he said something like Indiana was just 12 plays away from being undefeated the prior season.

That sounds great, but it’s true for virtually every team and rings of desperation.

Indiana was two plays away from being 7-5 last season, but that doesn’t change the reality that the Hoosiers were one of the worst defensive teams in college football for the third straight season, and that coach Kevin Wilson admitted to the media that during halftime of the Navy game that he felt his team would need to recover an onside kick in the second half to get the stop needed to beat the Midshipmen.

He was honest, and he was right.

If a coach is unwilling to be honest about the bad stuff, how can anyone trust him when he shares good stuff?  Yesterday, there wasn’t just confidence that Indiana would be improved, there was an acknowledgement that Indiana has been flawed and would continue to be.  There were also comments – many of them – about goals that extended far beyond the bowl eligibility that would come with a 6-6 record.

The more players and coaches I listened to, the more I began to believe that Indiana Football is confident it can play well consistently enough to be a bonafide contender in the Big Ten.  They were smart enough not to say it, but Indiana appeared to believe that it would not be overmatched despite a schedule that includes trips to Mizzou, Iowa, Michigan, and Ohio State.

I spent a long time with quarterback Nate Sudfeld, unquestioned offensive leader, and three things stood out.  Sudfeld remembers every bad play, why it went south, and what correction was required to make sure it didn’t recur.  He knows that playing within the scheme is where success resides.  And he knows that a team where all, including himself, are held accountable gives the Hoosiers the best chance to succeed one play at a time.

There are athletes who just reek of success and Sudfeld is one of those.  He’s funny, self-depracating, and possesses the best kind of confidence.

Confidence without arrogance allows an elite athlete to continue a relentless march toward improvement that has no destination.  Sudfeld has that – in spades.

Click here if you want healthy and beautiful teeth; Dr. Mike O’Neil and Today’s Dentistry are ready to help.

There have been more years than a Finite Math professor can count when a schedule featuring those four events would be seen as a lock for a 4-8 record – at best.  The formula for calculating IU’s record has long been to back out the obvious road losses, and split the rest.

But Indiana players were not buying into Hoosier Football math.  They relentlessly spoke of the processes necessary for success, how the new 3-4 defensive scheme is allowing guys to fly around, how leadership is obvious, and how the team has matured during Wilson’s fourth offseason.  And they did it with a steely confidence – the kind of quiet strength that usually foretells success.

How Indiana will play over 12 Saturdays this Fall will tell the tale.  Press conferences are solid proof that talk is cheap, but there was a significantly different vibe at Memorial Stadium yesterday than in previous years.  There was nothing to suggest the insecurity that has often predicted another year of onfield misery and fan indifference.

Predicting a successful season for Indiana Football has been a fools errand for longer than most students have been alive, but something seemed different yesterday in Bloomington.

The team that has everything to prove to long-suffering fans appeared to be on the cusp of believing in themselves and each other.

Here is the Hoosiers schedule for 2014.  Yeah, I included the Big Ten Championship at Lucas Oil Stadium.  Until the players appear to doubt their ability to play in it, why should we?

One thought on “Indiana Football – Doormat of the Big Ten looks to get up, fight, and win”