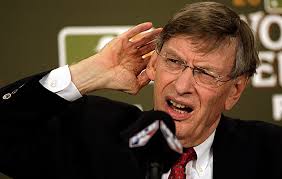 The inability to hear questions during press conferences was on of Bud Selig’s strengths as commissioner of baseball.

Regardless of which of the three finalists (if any) owners elect today as the next commissioner of baseball, it will be a guy who will do the bidding of the owners and little else.  And that may result in the slow death of the game.

Ticket prices, financial inequity among franchises, and the continued erosion of pace of play are distancing what was once America’s pastime from all but its hardest core fans.

Younger demographics cannot bear to watch the game on television or in the stands.

Sure fans are there, but attention lapses are many.  Go to a Cubs game, sit in the bleachers, and watch the eyes of the supposed fans.  If they ever focus on game action, it’s by mistake.  Wrigley Field is now a gathering place – a giant neighborhood bar – where twenty-somethings drink overpriced beer in the afternoon before venturing out for a foggy night out.

Go to the rooftops across Waveland or Sheffield Avenues, and count the heads of those behind the makeshift seating at the bars as opposed to the seats facing the field.  Those at the bar outnumber the baseball fans at least 10-to-1.

The available gambits designed to raise the enthusiasm of fans have all been played, and the result has been increased malaise.  Relentless interleague play has rendered the All-Star Game a tedious exhibition, and the World Series moot.

Implementing instant replay has been done with a keener eye on getting calls correct rather than to enhance the enjoyment of watching the game.  The rule regarding catchers blocking home plate causes bizarre and unjust overturns of infield calls.  Both delay the game.

Batters stepping out of the box to adjust batting gloves has also helped drive average game times beyond three hours.  Of course, the longer fans are stuck in the ballpark, the more cash they spend on concessions, but that cleverly earned gain is short term because it is outpaced by increased discontent from those fatigued by the snail’s pace of each at-bat.

All the while, the current commissioner has proclaimed literally every move made during his 20 years manning the owners’ rubber stamp a total and complete success.  Baseball has never been healthier, according to Selig.  Not sure whether he was actually playing a fiddle while he said that.

The PED crisis continues, regardless of the spin from the commissioner’s office, and the grotesque inequity in revenue generated by the teams has kept teams from competing on a level playing field for a generation – the Kansas City Royals last qualified for the postseason in 1985.

People don’t need to be smart to own a team or business; they only need wealth.  Nowhere is that axiom truer than in baseball, and the owners will show that to be true again today as they vote on a new head guy whose job will be to slow the passion leak for a game that used to captivate.  John Henry, the owner of the Boston Red Sox appears to be one of the few exceptions.  He appears to be one of the few to understand that the biggest problem for baseball is in engaging the fan base.

As other games have worked tirelessly to produce television shows, baseball has sweated over details that are meaningless to its customer base and has allowed to fester many important issues the NFL and NBA successfully dealt with years ago.

Baseball will continue to founder because changing a culture requires a change in leadership, and the true leadership comes from the owners who were born on third base, backpedaled to second and then first, and then celebrated their success in being on base at all.

Pete Rose will be kept out of baseball, more bandaids will be applied to the PED issue, the Yankees will continue to earn and spend three times as much as small market teams, dunderheads entombed in a monitor filled New York office will ponder for minutes whether to reverse calls as fans grow bored and disillusioned, and the old men in charge will wear themselves out patting each other on the back.

Do you cover your teeth when you smile, click here to get your teeth fixed and whitened by the best – Today’s Dentistry’s Mike O’Neil

It hasn’t been all misery under Selig, but the leadership so dearly needed for the game to reach a younger generation has been lacking for too long, and whatever the result of the vote today, it is likely to continue because there is no power behind the throne.  Selig has looked bewildered for 20 years as he brushed the bangs from his forehead, and while the haircut of Rob Manfred, Tom Werner, or Tim Brosnan may be an improvement, the look of confusion likely will remain.

One thought on “Baseball’s new commissioner – Meet the new boss, same as the old boss – no matter who it is”