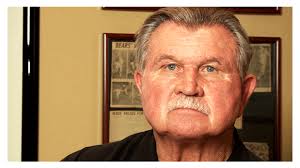 Mike Ditka went all “get off my lawn!” yesterday, and ironically it may be his silly rant that finally causes people to see the hate conveyed by the name “Redskin.”

Old guys can be fascinating interviews for two reasons – they have a cranky world view crafted through experiences that exist beyond our imaginations, and because at some point they decided that life is too short to sugar coat their version of the truth.

Mike Ditka will be 75-years old in two months, and he went old school yesterday in an interview about the use of the name “Redskins” by the Washington NFL franchise:

“What’s all the stink over the Redskin name? It’s so much [expletive] it’s incredible. We’re going to let the liberals of the world run this world. It was said out of reverence, out of pride to the American Indian. Even though it was called a Redskin, what are you going to call them, a Brownskin?

“This is so stupid it’s appalling, and I hope that owner keeps fighting for it and never changes it, because the Redskins are part of an American football history, and it should never be anything but the Washington Redskins. That’s the way it is.”

“Its been the name of the team since the beginning of football,” Ditka said. “It has nothing to do with something that happened lately, or something that somebody dreamed up. This was the name, period. Leave it alone. These people are silly — asinine, actually, in my opinion.”

“I admire him for it.  Really, I think it’s tradition, it’s history, it’s part of the National Football League. It was about Sammy Baugh and all the guys who were Redskins way back then. I didn’t think that Lombardi and Halas never had a problem with it, why would all these other idiots have a problem with the name? I’m sorry.

“I’m not very tolerant when it comes to the liberals who complain about everything.”

Ditka has been a cranky guy for a long time, so this rant might not be so much about age.  I can hear Ditka saying all of this to Johnny Morris on what were hilarious appearances on WBBM-TV every Sunday night of Bears seasons in the late 1980s.

A perpetual state of crankiness doesn’t excuse Ditka’s grotesque indifference toward Native Americans who are offended by the use of the derisive term “Redskins,” but it does provide a quick glimpse of a time long ago when the advice to those who were offended was to “get over it.”

Rather than grant a sect of human beings the respect they request, Ditka wants everyone to get over themselves and not listen to those (including himself) who might say something hurtful.

Oddly, Ditka might have hurt Washington owner Daniel Snyder’s case for retaining the Redskin name with his stream-of-consciousness blather in support of it.  Nothing drills down a side trying to use history and reason to defend an unreasonable and illogical perspective than a rant so virulent and odd that it becomes indefensible.

There is, of course, no defense for purposefully demeaning an entire nation of people, and by viewing this issue only through the prism of his own experience and strangely indifferent personality, Ditka shows a less than evolved viewpoint.  There are many Native Americans who view the term “Redskin” to be the equivalent of what the n-word is in the African-American community.

In some ways, it’s historically worse in that European interlopers virtually exterminated Native Americans in their land grab after settling on this continent.

Click here to give your teeth the gift of excellent care by Dr. Mike O’Neil at Today’s Dentistry

Ditka, like TV’s Archie Bunker, isn’t mean-spirited as much as he is detached.  Bunker was never hateful, just ignorant of the feelings of others. He was often surprised by Meathead’s (his nickname for son-in-law Mike Stivik) emotional response to his invective.  Bunker believed what he believed, and if people didn’t like it, they shouldn’t listen.

That was the attitude Ditka represented yesterday, and it’s ridiculously myopic.  Respect is the least each of us is due, and it is that lack of respect that defines Ditka’s rant – and Snyder’s continued intractability – toward adopting a name that an entire sect of people find demeaning.

We don’t have to agree with each other, but we should be willing to grant a modicum of respect to one another, and Ditka, as usual, indulged in what he felt was entertaining, not enlightening.  Just like Archie.

[ed. note:  For those who have never seen “All in the Family,” it was a sitcom that aired in the 1970s about a family led by patriarch Archie Bunker, a blue collar veteran of World War II who saw life simply.  He judged everyone based upon race, religion, and sex.  The show was a sensation through its run.  Half of America laughed at Archie because they agreed with him, and the rest laughed because they saw him as an idiot.  The counter to Archie was his liberal son-in-law Mike, who spent far too much time and energy trying to speed Archie’s evolution into a reasonable human being not defined by his intolerance.  Everyone watched this show that could not air on today’s network TV because of the rampant use of racial and national slurs.]

5 thoughts on “Washington Redskins debate – Mike Carey vs. Mike Ditka, which would you rather your son emulate?”