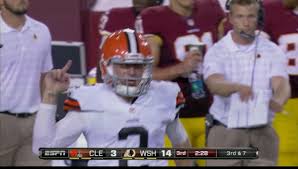 Writing the life story straight up to the end for Johnny Manziel isn’t difficult, and the brief NFL career he will enjoy won’t be the longest or most interesting chapter.

Manziel’s gift for prolonging plays in college is compromised by the speed of the defenders in the NFL, and his comparative inaccuracy delivering the ball isn’t a help either.  He’s competitive to the point of being combative, and while that might be a strength for many in life, it will be the downfall for Manziel in the NFL.

He can run, but can’t hide, and the cumulative punishment of the hits will eventually force him from the NFL.  Manziel is Jim McMahon without the arm.

Manziel is the anti-Tebow – a hard-drinking rich kid who became a quarterback and has captivated fans on and off the field.  The methodology has been 180-degrees different as the former fellow Heisman Trophy winner, but the result is the same.  The media follows the kid’s every move because media consumers cannot get enough.

The only unknown is the specific injury that will end it all for Manziel.  It could be a lacerated liver, ruptured spleen, shredded kidney, or a violent disturbance of a lesser internal organ, but it’s a matter of when, not if.

As thrilling as the gunslinger QB was at Texas A&M, he will be unable to discomfort NFL defenses coached by wily veterans and manned by exceptional athletes.  As a comparison between the best college players and ordinary NFL players, Mizzou DE Michael Sam was the SEC’s co-defensive player of the year in 2013.  In 2014, he was a seventh round draft pick who is fighting for a roster spot with the St. Louis Rams.

The NFL is filled with men who want to keep their homes, cars, and wives, and they are not playing games.  Manziel trifles with these guys at his own peril, and flipping off grown men as they cavort on the sideline is going to cause problems beyond fines and suspensions.  Just as happened with McMahon, someone is going to hit him with the intent of causing physical disruption to his ability to play football.

Manziel will then move into the next phase of his life, which will be to play golf, tinker with being a football analyst, and enjoy life in much the same way as he always has.  Nothing wrong with that.  Many of us would be envious of that life.

The Cleveland Browns, who have been a train wreck of a franchise since their resurrection in 1999, will continue to make bad choices because that seems to be their mission.  In that 15 season span, just once have the Browns earned a trip to the postseason, and only once (in a different year) have they won as many as 10 games.  General managers come and go, as do quarterbacks.

Tim Couch was the primary starter for four straight years from 1999-2002, but since then the Browns have had nine different guys start more games than any other in 11 seasons.  Either Manziel or Brian Hoyer will be the 10th in 12 seasons.  It’s damn likely that there will be an 11th in 13.

That’s the curse of a team with a constantly spinning managerial compass.  Stability doesn’t guarantee success, but instability is the hallmark of a habitual failure.

Nobody here is rooting for Manziel to fail.  I like the guy.  Life is too short to adhere to all the rules, and it can be painfully short for people unwilling or incapable to learn from their mistakes, and that appears to be the hallmark of Manziel’s personality.  Not going gently into that good night was a romantic notion advanced by Dylan Thomas.  Thomas ungently went at the age of 39.

The incredible thing is that it appears Manziel’s recent behavior is the result of trying his best to comport to the demands of the NFL and Browns.  This may be as good as Manziel gets, and that makes the 21 teams who passed on Johnny Football very smart.

By the way, based on his lifestyle as articulated in various publications and how those behaviors fit into a website that calculates lifespan, Manziel lives to be 58.  Tim Tebow lives to be 89.  Neither are an NFL quarterback.

2 thoughts on “Johnny Manziel has his whole NFL career ahead of him, but like Tim Tebow – it won’t last long”