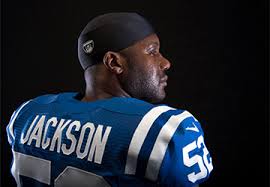 D’Qwell Jackson is one reason to believe the Colts will be much improved in 2014.

The first 49 minutes of the Indianapolis Colts loss to the New York Giants Saturday night were about as good as anyone during the preseason has a right to hope for. The last 11 minutes were just that bad.

Leading 26-0 after the starters had long since toweled off and become spectators, the dozens of fans left for the end of the 3:40 marathon watched that lead evaporate like a puddle on a sunny day.

The Colts last gasp was the reward for sticking it out as Pat McAfee attempted a 64-yard game-winning field goal that just slipped wide left and allowed a thoroughly thrashed Giants team to mark this game down as a meaningless win – which is just a bit better than a meaningless loss.

Of the two head coaches, there is no doubt that despite losing, Chuck Pagano slept a little bit better than Tom Coughlin Saturday night.  The starters on both sides of the ball for the Colts looked very good, while the Giants were not sharp in any phase of the game.

When Andrew Luck walked off the field for the last time early in the second quarter, the Colts led 13-0.  The defense flew to the ball, and seemed very energetic for a bunch of veterans playing in a preseason game.

And today at practice, the Colts spoke as though they believe there is meaning in the preseason after all.  Linebacker D’Qwell Jackson told me that “winning is winning,” and that the Colts play to win every game – even in August.  It’s expected that youngsters like defensive back Marcus Burley will fly around trying to make as many plays as possible because every play made might impress somebody, but the starters seemed to be full-go too.

The mindset for fringe players trying to make a living playing professional football is that all that has to happen is for one of the 32 teams to like them, and those plays during the fourth quarter of a supposedly meaningless game are actually quite meaningful.

For Burley, cornerback Loucheiz Puurifoy, linebacker Andy Studebaker, and running back Boom Herron, Saturday night was a big success.  For others, not so much.  Bjoern Werner also made an eye-opening play as he pursued a play on the opposite side of the field and made the tackle from behind.

As for Herron, he sure looks like a runner who doesn’t need to dance to find a hole.  He nestles up to an offensive lineman and explodes through the smallest of crevices for positive yardage.  We will see whether Ahmad Bradshaw can stay healthy (he was not wearing a red jersey in today’s practice).  If not, Herron may be needed.  If Richardson doesn’t start hitting holes as they open, Herron might be thrust into the spotlight.

The other great news for the Colts Saturday is that everyone left Lucas Oil Stadium in roughly the same physical condition in which they entered it.  Health is the most important stat of any preseason game.

For fans, the length of this game was problematic.  Three hours and forty minutes is a cruel expanse of time for a football game to be contested.  Each of the forty minutes after the three hour mark passes exponentially slower than the previous one, and by the end of the night, fans feel like survivors, not willing participants.

The length was the result of a strange group of officials dedicated to emptying their pockets of flags, and rarely sharing with us what the call was.  Actually, I’m not sure whether that was do to the officials or the director of the telecast failing to cut to the official, but I’m assuming the former because I didn’t overhear a call through the public address system either.

Click here to get your teeth fixed by the best dentist anywhere – Dr. Mike O’Neil of Today’s Dentistry

If the NFL wants to force season ticket holders to pay for preseason games, the least they can do is offer a professionally presented product.  Fans don’t need to see starters throughout the game, but a referee sharing calls with the audience should be a simple fix.

Speaking of the telecasts, Don Fischer has done a very nice job on the televised play-by-play, but Barry Krauss has yet to enlighten as analyst.  He is a very nice guy, but when 26 year NFL veteran coach Rick Venturi is sitting at home in suburban Noblesville, it seems silly not to utilize him.  I learn more about football every quarter I sit next to Venturi at NFL games than I previously knew.  Glad that 1070 the Fan is putting him to work, but fans deserve more from Venturi.

The clock is ticking to the regular season when games matter plenty, but the Colts appear to be right where they want to be with two preseason games left.