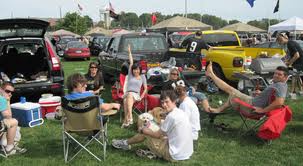 The key to fill the seats at Purdue’s Ross-Ade Stadium is compel fans to leave the comfort of cheap food and drinks – but for what?

In a USA Today piece posted yesterday afternoon several athletic directors representing Big Five conference universities spoke of the difficulty of drawing students to football games.  Purdue’s Morgan Burke was one of them.

Burke’s comments were certainly reflective of the collective mindset of those facing the challenge of compelling students to part with the cash necessary to watch football in person rather than on television, “You’ve never seen (television) ratings higher, so the games are being watched, but schools that traditionally thought they never would have to have a sales arm as part of their athletic department now have a sales arm. That tells you something. We’re as concerned as everybody else that this generation somehow doesn’t have the same affinity for football and that it can hurt you at the gate down the road.”

So what are the meaningful points of differentiation causing students to make the decision to watch in their dorms/apartments or bars rather than to make the trek to Ross-Ade Stadium on a beautiful Saturday afternoon?

Here are some quick issues that are Purdue specific:

So what do football programs need to do to attract student fans in bulk?

Click here to check your mouth for oral cancer and fix your teeth at Today’s Dentistry!

These moves work at many other universities, including Indiana.  College kids are college kids – wherever they are.

This isn’t a tough putt.  Solving these problems only requires a trip down memory lane.  Why did I not attend more than a half dozen Indiana games?  See above, and add high speed smart phone connectivity.  Giving students what they have access to in the parking lot is a fairly simple place to start.