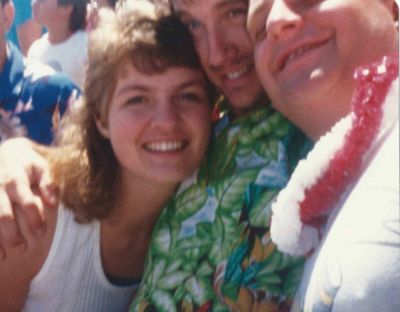 That’s the smile that makes my heart beat again every morning (not Bill’s).

Unhappily lost in a maze of perplexing classes and crowded parties, I got very lucky on August 30, 1984, when an almost always smiling force of nature danced into my life.

At a party in Walnut Knolls apartment D-19, college students were doing a lot of what college students normally do on a Thursday night, drink beer and burn calories through frenetic movement.  Most of the time, my energy was expended through silliness and occasional beneficent acts like granting free HBO to neighbors too cheap to pay $9/month for endless reruns of Red Dawn and Karate Kid, but this night I was dancing.

I didn’t dance often and still don’t, but for some reason Bob Seger got to the people at this party, and there was dancing.  I was bouncing all over the apartment, not dancing with anyone specifically when this girl with two-toned hair and a big grin started flying around the apartment with enthusiasm and rhythm.  She was the star of the party by far, and it was inevitable that we bumped into each other.

No words, just dancing and sweating.  With each song the ante was raised, and before long we were the only people cavorting with ever increasing energy.  The dancing wasn’t so much an answer for a mutual attraction but more a death match of hysterical flailing.

Exhausted after 15 minutes of spinning, bouncing, and shouting, a friend named Freddy grabbed me and shouted over the music, “Don’t screw this up – she’s the one.”  I told him I knew.  Dancing continued, swimming followed, and finally we fell asleep on the couch watching TV.

Everyday since, we have spent at least a few minutes talking and sharing, and ten days after meeting I asked her to marry me.  There was no dropping to one knee and opening a box containing a shiny and expensive ring.  No, this was on the walkway in front of the Western Sizzlin Restaurant just in front of Walnut Knolls.

With a giant bottle of wine between us, I said, “You know, I think we ought to get married.”

We sat and laughed for another hour, and that was that.  Looking back, there was no need for that moment as oddly perfect for us as it was.  From the moment we danced, I knew.  I’ve never been certain whether Julie was committed immediately, or just rode along with the kook who seemed so sure us being together was absolutely the only way to go through life.

There have been short periods of friction and strife, but 99% of the time we smile through life either because of or in spite of each other.  It doesn’t really matter which, but for my part it’s almost always because of Julie.

She has always been relentless in her pursuit of being a better person today than yesterday, and being exposed to that level of personal diligence has been an unending gift, and her smile is the purest expression of joy I have ever seen – and I get to see it constantly.

We have built a life, raised a son who epitomizes the best of us – or at least what we selfishly perceive to be the best of us – and continue to look toward the future with hopes and dreams.

Click here to invest your time wisely by seeing the best dentist in Indiana – Dr. Mike O’Neil at Today’s Dentistry

It doesn’t seem anything like 30 years since we met, but it also feels like forever.  Remembering what my life was like before Julie is hard and unpleasant.  I was a lost ball in tall weeds without much hope of finding a clearing without the steady hand of a clear-eyed guide, and Julie wasn’t so different, but we locked arms and started marching forward toward something.  Even if we headed the wrong way, how bad could it be if we were together?

If people are lucky, they get ten days of grace through their lifetime, and August 30, 1984, was as good a day as I have had because I found someone for whom I had always searched, but never knew existed.  I have been almost as fortunate for the thousands of days since because I have continued to find her again and again when I awaken.

Tomorrow, we will return to Bloomington and Walnut Knolls D-Building to remember a night so long ago it seems like yesterday.  Just like every tomorrow knowing Julie will be next to me, I can’t wait for it.