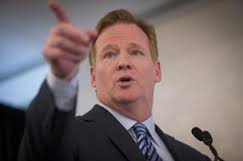 The video was horrifying.  Baltimore Ravens running back Ray Rice throws a left cross, and Janay Palmer is knocked unconscious.  Rice waits patiently for the elevator to open, drags her limp body into the lobby, and retrieves her shoe.

We have all seen it – or should, and those who saw the initial video from the outside of the elevator assumed the scene that led to Palmer being pulled from the elevator looked similar.  But not the Baltimore Ravens and not the NFL.

That lack of reasonable leadership provided by the NFL and Ravens has been stupefying, and it continues.  The NFL has hidden behind a ludicrous statement released yesterday that they never saw the tape released yesterday on TMZ.com.  They are either lying or were not interested in seeing it.  Everyone knew it existed, and TMZ was able to obtain a copy while the NFL could not.  Absurd.

The Baltimore Ravens management sent John Harbaugh to represent the franchise during a press conference and Harbaugh said the Ravens had not seen the video until yesterday.  When asked why they had not seen it, he did not have a response.  Where was Ravens owner Steve Bisciotti who is responsible for hiring to a specific culture?  Where was general manager Ozzie Newsome?

More importantly, where is the leadership from the NFL?  Where is Roger Goodell?  In late July, Rice was suspended for two games by the NFL.  Five weeks later, a policy on domestic violence was announced that would require a six week suspension for a first offense, and lifetime ban for the second (reinstatement could be sought after one year).  Yesterday, the NFL suspended Rice indefinitely.  What is the policy?  Why has the policy changed three times since July 25?

Why did Goodell interview Rice and Palmer together, as has been reported.  Anyone who has watched an episode of Law & Order SVU knows that a domestic violence victim and suspected perpetrator should never be interviewed together, and what in the hell is he doing as the interviewer.  The NFL has a large team of former cops serving as its security force.  Let the cops do the interviewing.  Goodell should restrict his activity in the process to issuing edicts based upon the gathered facts.

No one expects the NFL to lead the world to morality and decency.  No one expects perfect behavior from young men with too much money and virtually no meaningful consequences – unless they smoke pot.  Everyone knows that winning is the most important thing to coaches and executives.

What we hope to see is a backbone – a spine.  Some measure of consistency should be advanced by the commissioner, not repeatedly edited statements and varying levels of consequences for the same incident based upon the current level of outrage from the media and public.

Without that, confidence in the league itself cannot be granted by fans.  The NFL deserves better than the leadership Goodell has provided.  The Ravens deserve better than Biscotti and Newsome.  Harbaugh should have been accompanied by both.  It’s not about the NFL being harsh, unyielding, draconian, invoking a zero tolerance policy, or showing a seriousness about the wretchedness of a man knocking a woman unconscious.  It’s about a paradigm of logic being applied that brings consistency, and that consistency will bring confidence.

Domestic violence is a heinous crime that should be dealt with severely.  Women are abused in frighteningly high numbers, and the lasting emotional scars for victims and their children last forever.  That the Atlantic City prosecutor allowed Rice to opt for diversion in lieu of seeking a conviction, and the NFL had no idea how to respond time after time reflects an even more bizarre and unfathomable problem – greater empathy for attackers than victims, and a total void of leadership among those with more to lose than gain by providing it.

There is shame everywhere.