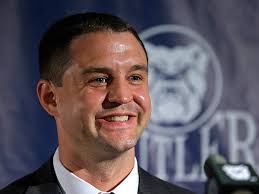 Brandon Miller stepped away from the Butler program to get better. What he’s trying to get better from is none of our business.

Brandon Miller is 35 years old and has the job of his dreams, but has requested a leave of absence for medical reasons, Butler University athletics director Barry Collier announced yesterday in a statement.

The message from Collier is simple and vague, “Brandon Miller has requested a leave of absence for medical reasons, which the University has granted.  We are not in a position to further elaborate and we ask that everyone respect Brandon’s privacy.  Chris Holtmann has been appointed interim head coach.”

Because of HIPAA rules that prohibit the release of medical information, Collier can’t say more.  So we wonder what might have gone so wrong with Miller that he needs a leave so long that an interim head coach needed to be named.

Our imaginations search for logic and reason, but we feel guilty about that because as much as we like to know the answers to questions like “What’s wrong with Brandon Miller?” we also know that it’s none of our damn business.

Whatever battle Miller fights, whatever required him to marshal his resources away from the job at which prepared he entire life to excel, he needs to do it without the prying eyes of strangers, fans, and acquaintances.

It’s up to us, then, to pray and hope for Miller without specific knowledge.  A good guy is struggling with something serious.  We know that because we know Miller’s commitment to his team is complete, and if this wasn’t a serious challenge, Miller would try to find a way to split his focus.

By all accounts, Miller is a good guy and good family man.  Even if many Butler fans haven’t had any personal interaction with him, we can assume that he’s a good guy because Collier trusts him to lead the Bulldogs.  Those who preceded him are good men, and so Miller must be one too.  The Butler Way that Collier demanded requires it.

I’ve spent a very little time with Miller, but I liked him.  Sitting outside the Bob Kravitz Golf Outing for ALS a few months ago, Miller (who doesn’t play golf) stopped by to greet golfers as they arrived.  I was there to record interviews with people for the radio show, and talked to Miller about family and finding balance in life.  He was open and honest, and the kind of guy you enjoy killing a half hour with, which is what we did.

Miller struck me as unimpressed with himself – a guy more comfortable talking about his wife, kids, and players than his own exploits.  He is an uncelebrity kind of celebrity.

None of that really matters because we should hope and pray for even the wretched refuse of society to gain the strength needed to fight and win their fights with illness, but when a guy like Miller decides to step away without explanation, our compassion is piqued.

There will be those in the media instructed by their employers to find out what the hell is happening with Miller, and it’s only a matter of time before somebody close to Miller pulls back the curtain enough to reveal what Miller and Butler want to keep quiet.  That’s a shame.

Click here to get your teeth fixed by the best dentist in Indiana – Dr. Mike O’Neil of Today’s Dentistry.

Media works way too hard to force celebrities to live without the privacy most of us take for granted.  Some secrets deserve to be kept, and without the curiosity that drives the media’s zeal to shine a light into every corner of a man like Miller’s life, maybe this one can remain under wraps.

So pray for Miller and his family to find the strength they need to overcome whatever malady has confronted them, but resist the temptation to peek beyond the boundaries set by Miller, Butler, and HIPAA laws.

Maybe the media will take your lead.