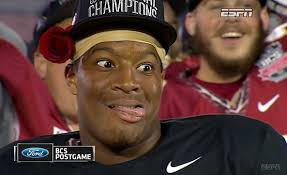 Jameis Winston is playing college football today, and that defines the shame that surrounds a great game.

Go ahead and read the New York Times report on collusion and corruption in the legal process that is so obviously employed by law enforcement in Tallahassee, and tell me that football program shouldn’t be subject to the death penalty.

Forget Jameis Winston, an apparent poster boy for entitlement and enabling so vile that Johnny Manziel looks like a choir boy by comparison. That he is playing today against Syracuse while Georgia’s Todd Gurley sits suspended for signing some footballs and mini helmets for between $8 and $25 per unit defines the level of inequity and illogic in college sports rule structure that has fans so perplexed and frustrated.

Accused of rape, disciplined for engaging in BB gun fights that caused thousands of dollars worth of damage, caught shoplifting seafood, and suspended for one game for jumping up on a table and yelling something so misogynistic and vile it cannot be written here, Winston is not only a pox on college football, but on higher education as a concept.

Those are the allegations that are known about Winston.  There are so many other Florida State players with records of misbehavior swept under a rug that the only logical conclusion – one shared by the piece in the New York Times – is that football players are allowed the run of campus without fear of any consequence for bad acts.

The primary reason cited by the Times for the cops looking the other way is that the Seminole football program is integral to the economy of the area, and that many local police officers are compensated by the university as members of the football game day security detail.

That Florida State University is complicit in allowing police malfeasance to steer student-athletes away from adequate penalty must be addressed by the NCAA, or why does the enforcement arm of the organization even exist?

Nearly two years after the rape allegation was made in December of 2012, Winston will reportedly face a disciplinary hearing.  That has a lot more to do with a potential Title IX violation and media scrutiny than a sense of justice and empathy for the alleged victim.  Yet, Winston continues to play this afternoon.

When the Seminole Boosters pay the majority of coach Jimbo Fisher’s salary and bonuses, it becomes easy to see why Fisher might be enticed to look the other way when his best player steps out of line.  His bonus structure (according to the NY Times) also shows that the moral compass governing football in Tallahassee has been stowed safely in a drawer and is rarely, if ever, consulted.

The mandate to Fisher is clear – WIN!  Damn the female student population at Florida State.  Screw the safety of those near the BB gun fights and the damage done to windows and cars.  To hell with trying to educate students about right and wrong.  Win football games, and even the most egregious and repulsive antisocial acts are buried for the benefit of the Seminole glory.

Oversight organizations are needed to correct exactly the kind of corruption that reportedly rules behavior at Florida State, and every additional crime committed in Tallahassee is the responsibility of all those with the ability to correct the “win at all costs” mindset governing law enforcement there.

That requires Winston be expelled permanently from college football, and that the school suffers the sanction reserved for those who most egregiously lose their way.