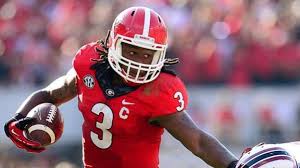 Todd Gurley’s is currently being stiffarmed from playing by a ridiculous rule banning a player from profiting from his image.

If a piano playing prodigy on scholarship at Slippery Rock University plays Carnegie Hall and takes a check for $45,000 as compensation, he or she is applauded and welcomed back to school.  If a computer genius on scholarship at Hillsdale College creates a social media platform that drive millions into his or her bank account, the school proudly crows about the accomplishment.  If a chemistry major on scholarship and Cal-Poly San Luis Obispo perfects an ointment that eradicates acne on contact, he or she pockets major cash and continues life as a student.

When Todd Gurley, running back for the University of Georgia Bulldogs, sold autographs for between $8-$25, he was suspended indefinitely pending an investigation.  The NCAA has rules preventing players (both on scholarship and not) from profiting from his or her image.

If you have heard or read about the Ed O’Bannon lawsuit, that is the paradigm it challenges.  O’Bannon and his legal team argued that the NCAA banning kids from being paid for the use of their likeness in video games and jersey sales constitutes restraint of trade.  The judge ruled in O’Bannon’s favor, but that ruling is currently under appeal.

So guys like Gurley continue to be held accountable when they act on their objections to the obvious incongruity of the self-serving rule by stepping over the line to sign for a little spending money.

Former Heisman Trophy winning quarterback Johnny Manziel was suspended for one half of a game last season because of the suspicion that he took a sack of cash in exchange for signing a bunch of memorabilia while in Miami on a trip with friends.  That group kept their mouths shut, and the storm blew past soon enough.

Those who respect obedience over reason will say that Gurley should have adhered to the rules, regardless of whether they make sense because the consequence is too severe not to.

I would suggest the opposite by recommending that every student-athlete whose autograph has value to collectors stage public signings where cash is paid for their trouble.  Let the NCAA or its member schools suspend every uniquely talented player in football and basketball, and let’s see how long this arcane and silly rule stands.

Respecting arrogant authority is a decidedly un-American concept.  This country was founded and built by a sect of people dissatisfied with the status quo who believe a little organized rebellion is good for the soul.

Universities profit from the images, and the motivation for continuing to restrict the earnings of its players is to enhance their ability to profit.  Every dollar pocketed by athletes is a dollar the school cannot control.  When trying to discern motivation for virtually any activity or the enact ion of the rule, always zero in on cash.

Moral outrage from an authority figure?  Dig a little and find the financial concern driving policy.

Instead of making great efforts to avoid detection for those hundreds of football and basketball players who accept money for signing things – or just for being who they are – players should do it in the light of day – preferably as part of a ceremony televised live.  They should accept the cash, wave it over their heads, and do a little dance as they stuff the dinero in their pockets.

Dare the NCAA and its schools to act against hundreds of the most important players in college sports.  Universities still teach Gandhi’s tactics of passive resistance and civil disobedience, don’t they?  At the time, Gandhi was seen as a rabble-rouser.  How about Muhammad Ali?  He refused to serve in the Army during the Vietnam War, and was vilified as a traitor by those who forgot that speaking your mind is a very American thing to do.

Want to save money and enjoy the best dentistry pain-free – Click here to learn about Dr. Mike O’Neil and Today’s Dentistry

The ends justify the means for the power structure of collegiate athletics, and anytime that is the case, action must be taken.  The courts take too long, as O’Bannon and his co-plaintiffs have discovered.  Time to organize a healthy revolt to quickly recalibrate the moral compass of college sports is long overdue.

Are there going to be unintended consequences for opening a market based economic model for compensating athletes for the use of their images?  Of course, but they will by definition be an improvement of the corrupt system currently in place.

In the meantime, Gurley will cool his heels as the Bulldogs prepare for Mizzou this Saturday.