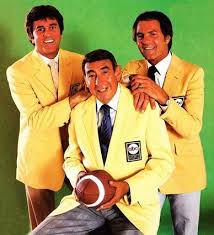 From left to right, Don Meredith, Howard Cosell, and Frank Gifford were TV stars in a way that can’t be compared to what exists today.

Before we started to take sports so damn seriously, there was a Monday Night Football broadcast that was more TV party than typical play-by-play.

Howard Cosell, Don Meredith, and Frank Gifford brought swagger and celebrity to the NFL, and their performance was more important to the success of the show than the game they described.

Regardless of the teams competing, millions tuned in to Monday Night Football because it was an event unto itself.  Nothing against current ESPN broadcasters Mike Tirico and Jon Gruden.  They are wonderful at what they do as they execute consistently excellent game descriptions – but Cosell and Meredith were outrageous, funny, cantankerous, and alternately haughty and silly.

Cosell was an odd looking and thoroughly repugnant human being by all accounts who took pride above all else in his ability to bloviate.  But when he was on top of his game, Cosell was one of the five most famous people in America, and simultaneously our most beloved and hated sports figure.

The show was perfectly cast with the opinionated egomaniac (Cosell), the laid-back counter puncher who could deflate Cosell and amuse fans, and the steady eddie (Gifford) who could describe the game while chaos from Cosell and Meredith reigned.

It was a TV show hosted by rock stars that took place while a live football game was played.  Americans needed a diversion from real life during the Vietnam War, Watergate, assassinations, rampant protests, and a general chaotic state of affairs in America.  Today, real life serves as a diversion from our frivolity.

In the 1970s, there were no social media and only three or four TV channels.  Everyone watched the same thing, and if a guy missed Monday Night Football, he was left out of the Tuesday morning conversation.

When I was a kid, the older generations would explain how quaint life was back in the day, and I thought it must have been incredibly dull.  When I think about the 1970s, my memories are of a time of borderline bedlam.  It was an invigorating and crazy time.  There were constant threats to our safety, corruption was rampant, and stupidity in the form of racism, sexism, and anti-any sect rhetoric was sadly a dominant theme.

Americans behaved much closer to the edges of societal mores then, and Monday Night Football reflected those times.

Just as the professionalism and ultra serious work of Tirico and Gruden define this decade, the wild mayhem of Cosell and Meredith reflected American life in the 1970s.  It’s not that Tirico and Gruden aren’t capable of good-humored banter, but the overall theme of MNF in the 2010s makes the game the star of the show.  In the 1970s, the dog still wagged the tail instead of the other way around.

I’m sure people in their teens and 20s find the stories about the 1970s exactly as boring as those I heard about the 1930s.  Life without smart phones, 500+ channels, 4K TVs, Xbox, Playstation, and immediate access to every piece of information ever learned is unthinkable.  Government officials honestly representing their own idiocy, and newspeople endeavoring to tell the truth are so far from what has become acceptable discourse today that we might be tempted to see our society as being in the midst of unprecedented progress.

Click here for pain-free cost-effective work on your teeth by the best dentist in Indiana – Dr. Mike O’Neil at Today’s Dentistry

The truth is that our behavior is safer, but not necessarily better.  Mistakes are fewer, but moments of genuine engagement, horror, and wonder have been almost entirely removed from our lives.