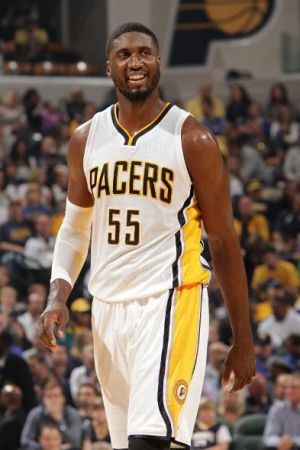 It was tough to get a great read on the Indiana Pacers in last night’s opening night 103-91 over the Philadelphia 76ers   We knew that would be the case before the tip.  Both teams were missing key pieces to their roster, and the first of 82 regular season games was not going to fill in a significant part of the picture that will develop over the next six months.

There were a few obvious takeaways –

On a night when Roy Hibbert should have been the best player on the floor – he was.  He responded poorly when fouled by picking up a technical that could have been more – on a night when the Pacers could least afford to play without him.  Defensively, coach Frank Vogel expects consistent activity from his throwback center, and Hibbert’s seven blocks gave it to him.  His 22 points on only eight field goal attempts was the kind of efficient performance they will need from Hibbert to compete until West and Hill return.

The halftime ceremony was the highlight of the night, as the Pacers honored Slick Leonard one more time.  He was the greatest coach in the history of the franchise, and remains the best ambassador the franchise will ever have.

Slick is a magical presence on the radio, and while all Pacers fans equate his “Boom Baby!” call with so many of the successes experienced over the years, the team would have moved from Indianapolis without his presence and passion during the franchise’s darkest times.

Had the Pacers moved, it’s very unlikely the Colts would have chosen to relocate here, and then where would downtown be?  Indianapolis would be Louisville – no offense to Louisville.

The second half showed a level of play that could bring more wins as the Pacers try to tread water until help arrives.  The first half was hard to watch at times.  Turnovers, fouls, and overall clunkiness led to the Sixers taking a 51-48 halftime lead.  The tide turned after intermission as the Pacers outscored the 76ers 55-40.

When you open up against the patsy of the NBA, everything from that point forward is going to be uphill.  The Pacers host Memphis tomorrow night at Bankers Life Fieldhouse, and they are going to be a more challenging quarry.

Click here to maximize your dental health – Mike O’Neil, the best dentist in Indiana, can be your dentist!

According to Luis Scola, the Pacers will need to work to clean up the 18 turnovers that marred their effort, but the Pacers were good enough to post a W in Game One, and that was good enough for fans last night.

The expectations for the same franchise that was thought to be a favorite to earn a spot in the NBA Finals just eight months ago are muddy at best.  Estimations range from 30-45 wins depending upon when the team gets back some of its walking wounded.

All associated with the Pacers may look back at 1-0 with fondness in a few weeks, but last night there were stretches of play last night that gave hope to a fan base unsure what they are watching early in the 2014-2015 season.