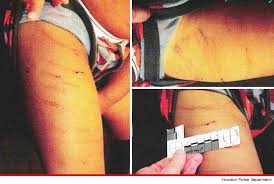 How could what caused this help a child learn anything good about life?

Discipline is an interesting concept.  Many see it as the introduction of fear serving as a consequence for a bad act.  Others see it as the dynamic of holding ourselves accountable for our own behavior.

Some just get pissed off and hit kids with sticks.

Adrian Peterson hit his four year-old son with a switch long and hard enough to cause scarring still visible days later, and so he doesn’t get to play in the NFL again this season.

That’s called NFL commissioner Roger Goodell meting out a consequence on an employee who did the wrong thing at the wrong time.  Actually, it’s Goodell trying to change the narrative that developed over the past few years that he was way too lenient in holding players accountable for all offenses not drug related.

But this isn’t about Goodell’s motivation for banning Peterson (and Ray Rice) from the NFL.  It’s about how to teach behavior.  Fear of momentary consequence is one way, rewarding correct actions is another, and explaining the lasting results of good and bad acts is a third.

My feelings on spanking a kid has always been that if an adult can’t teach (or trick) a child into doing the right thing, he or she isn’t very bright. If a parent says something like, “My Dad spanked me, and I turned out alright,” I get a little impatient.  We should strive to raise kids to be a little better and brighter than ourselves.  Exercising weak behavior as though it’s a rite of passage from one generation to the next explains why we aren’t getting a whole lot kinder, gentler, or smarter from decade to decade.

There as a massive chasm between the concepts of wisdom and obedience.  If the goal of a parent is blind servitude, their child will become an adult who obeys and values a rigid adherence to following rules.  Teach children why some behaviors are frowned upon and others are exalted, and the result will likely be adults ready to think on his or her own while trying to improve their family, neighborhood, and culture.

One lesson that kids learn from violence is that violence is a righteous solution for problems.  You think TV and video games cause violence in society, you might be right.  There is no doubt that real life violence causes more and more violence.

When I was a kid in an elementary school north of Chicago, the thought of a teacher raising a hand to us was unthinkable.  When my family moved to southern Indiana, teachers routinely paddled kids.  I got swats once in high school myself, and once that happened, I knew that I had won.

Once I got hit, I knew I could stand it.

The best advice I ever got about discipline came from a summer camp director.  He said, “Never tell the kids what the consequence for their misbehavior is.  Once they know, you’re involved in a negotiation, and kids are very adept negotiators.”

You know what the director was talking about.  When you were a kid, and a parent said, “If you aren’t home by midnight, you’re grounded for a week!”  You weighed the value of the fun of staying out until three against the loss of fun staying home for the next week.  If a parent said, “Be home on time!” that meant damn near anything was possible as a consequence.  The unknown is a difficult quarry, and more likely to cause a reasonable response.

Peterson was hit when he was a kid, and now he believes that because he found a way to succeed that hitting was part of the cause.  While Goodell isn’t a parent and he’s acting with both eyes on PR for the NFL, the conversations resulting from Peterson’s suspension might be a great place for a better form of parenting to begin.

There is always a better way, and not hitting kids is a great place to start.