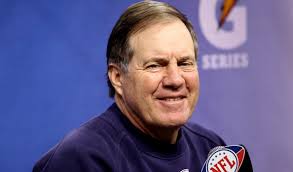 Even when Bill Belichick smiles in front of the media, it looks painful.

Really smart people continue to treat the media like the enemy rather than making the small effort necessary to befriend and use it to their advantage.

Dan Jenkins is a sportswriter at the end of a long career, and he posted a fake (supposedly satirical) interview with Tiger Woods.  I haven’t read a word written by Jenkins in a very long time, but there was so much fuss made by Tiger Woods and his minions that I thought something there might be funny or interesting.

Nope.  Just a litany of dimly executed clumsy attacks.  The post would have languished in the nether-regions of digital anonymity if not for the spotlight shone on it by Woods.  Somehow, Jenkins is relevant again despite work unworthy of a mean-spirited fourth grader.

All because Woods made it an issue.

Washington Redskins quarterback RGIII stepped to the podium to address the media this week, and repeatedly replied, “I’m just getting ready for San Francisco,” to a variety of questions about many things unrelated to the 49ers.  His performance echoed New England Patriots coach Bill Belichick’s petulance in a press conference earlier this season when he answered all questions, and interrupted several others before they were asked by saying, “We’re on to Cincinnati.”

In the case of Woods, he should have known that he was doing nothing but a favor by attacking Jenkins’ stab at humor.  Paying attention to what’s written and said about you is idiotic for a D-list celebrity, much less a guy at the top of Fame Mountain like Tiger.  Sifting through online posts, message boards, and Twitter for praise and insults is a moronic pursuit for any of us.  When you are known by a single name (Tiger, Cher, Madonna, Barack, and Ali), it’s a hideous waste.  Woods is not a moron, so why give a damn?

Marshawn Lynch is another extreme case in treating the media with disdain, and it cost him $100K yesterday as the NFL fined him $50K for not participating in mandatory media availabilities, and deciding to collect another fine the same violation is 2012.

Lynch writing a six-figure check rather than say uninteresting things to people doing their jobs shows a total lack of respect for middle class fans that dig deep to pay for tickets.

And there are consequences for being a jerk.  Thin skin is attacked by some media members with zeal.  Others in the media like to do their job unimpeded by self-importance.  Question – answer – thanks.  Than’s what most in the media want from athletes and coaches.  It’s a job.  Athletes and coaches can make it easy – or difficult.

Make it difficult, and the media will show their teeth.  That can be unpleasant, and serves only to widen the chasm between two groups that can benefit from reasonably accommodating behavior.

The tough part to swallow as we watch RGIII and Belichick is that the media can be very reasonable and decent.  It’s not a group of thugs hellbent on making athletes and coaches miserable.  It’s so easy to manipulate the media that it can serve to build a very valuable brand that belligerence is a nonsensical strategy.  Not making that small effort is short-sighted.

As for Woods, if he wants to be pissed off, that’s fine.  It’s not like Golf Digest is easy to ignore in the golf business, but Woods voicing his outrage drove so much more attention to Jenkins piece that the big winner is Jenkins.  If Woods had ignored it, or said, “Hey, I read the thing, and hoped it would make me laugh.  It didn’t,” Woods wins.  Simple.

Chick Here for a $1 dental exam by the best dentist in Indiana – Dr. Mike O’Neil of Today’s Dentistry

There are people who earn a handsome living advising athletes about dealing with the media, which is the silliest thing I have ever heard of.  If you show up on time, and talk in an engaging way without betraying the trust of teammates or coaches/staff, you win.  If you show up late and betray self-importance, you can have trouble.

In the hands of a shrewd person, the media is a tool to use to make even more money and build a lifelong brand.  Belichick, RG III, and Tiger will have money in their pockets forever regardless of how they deal with reporters, but when the media gets a chance to exert what little power they wield, it will be done with relish to their detriment.

Why stir the hornet’s nest?  Inviting intense media scrutiny into your life is silly.  Be nice, be prompt, and never show your ass.  When a reasonable solution is that easily invoked, why not just do it?