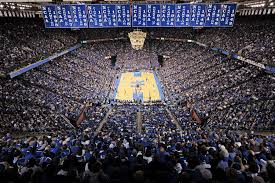 All these members of Big Blue Nation were asked to pay real money to watch UK destroy UT-Arlington last night. How is that right?

After watching Kentucky jump out to a 65-11 lead over Montana State and take a 55-12 halftime lead last night against Texas-Arlington, I thought about the poor mopes in Big Blue Nation who paid to attend the games at Rupp Arena.  The players for both sides wasted their time in those romps, and the TV audience on the SEC Network switched over to “The Voice.”

Savannah State accepted its 87-28 beatdown at the hands of Louisville at the Yum! Center in exchange for a paycheck.  The point of the game was to fill the stands with fans willing to pay for garbage in exchange for tickets to conference games later in the season and maybe a token solid non-conference game or two.

At the same time, conferences have expanded beyond the point where a true double round-robin schedule can be executed given the current load of 18 conference games.  The Big Ten and SEC are at 14 teams, so members play against five conference opponents twice and the other eight only once.  The ACC has 15 members, so that means four home and home opponents and ten teams that are played once.  The Pac-12 actually has 12 teams, which is a novelty.  They play seven teams twice and four once.

That makes for an unbalanced schedule that renders the regular season champion difficult to truly determine.  Playing Kentucky, Wisconsin, Duke, or Arizona twice is a serious disadvantage compared to those who get bottom feeders twice.

If that inequity annoys fans, it drives coaches crazy.

How fortuitous that these two problems have the same solution – a longer and more robust conference schedule.

Some say there is no way that a 26-game true double round robin is possible for the Big Ten and SEC.  Not sure why that is.

I’m all for events like the Maui Invitational, Battle for Atlantis, and the Crossroads Classic.  Let’s continue to enjoy watching early season matchups between programs from different leagues.  It’s fun to see the regional games between rivals like Louisville and Kentucky, Purdue and Notre Dame, and Florida and Florida State.

Keep six games for tournaments and rivals, and move the rest to conference contests that will engage players and fans.  No one wants to see a sad group of kids from Savannah State, Montana State or some other tiny school willing to lead its lambs to slaughter for gas money.  Humiliation should not be a part of the “excitement” of college basketball.

Let’s have the major conference teams play a non-conference schedule similar to that (not) enjoyed by Mike Davis’s Texas Southern club.  They spend the next five weeks facing off against Michigan State, Gonzaga, Florida, Baylor, SMU, Kansas State, and Auburn.  They’ve already lost to Indiana and Tennessee.

For the dozens of Texas Southern fans who can’t wait to see the Tigers live and in person, I hope they have frequent flyer miles.  The only home game prior to January 17th is Friday night against Lamar.

If someone can tell me how that level of travel enhances the educational experience for Texas Southern “student-athletes,” I’m all ears.  On the 11 trips they will take to play 40 minutes of basketball, Texas Southern will travel 24,766 miles.  That’s 93 miles shy of a trip from its gym in Houston all the way around the earth at its widest part back to that same gym.  All to see exotic and educational locales like Bloomington, Las Cruces, Norfolk, Knoxville, and Cheney, Washington.

If the NCAA wants to protect the integrity of amateur competition by suspending a kid like Georgia running back Todd Gurley for what could have been a Heisman Trophy season at Georgia for accepting a few bucks for signing jerseys and mini-helmets, how about doing something about schools barnstorming kids all over the country like the damn Harlem Globetrotters in search of a few bucks.  Couple of dollars for monetizing your image?  Sit for four weeks!  Weeks of missed classes and mind numbing travel in exchange for checks for the school?  Hey why not!