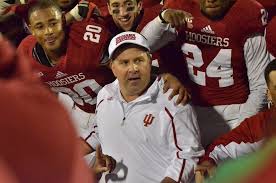 Kevin Wilson and Darrell Hazell may not make the wildest dreams of fans come true, but both are good enough to deserve another year.

With change at the top, you know what happens – a guaranteed additional two years of rebuild-driven wretchedness.  The football programs at Indiana and Purdue have seen that misery up close for more than 30 years, minus the Bill Mallory and Joe Tiller eras in Bloomington and West Lafayette.

As athletic directors Fred Glass and Morgan Burke evaluate the teams that need to drive athletic cash flow and interest in the universities among boosters and alums, the coaches should be safe for at least one more year – not because success is guaranteed with the retention of the two coaches, but because failure is all but assured with change.

The litany of IU coaches who have failed to generate interest and success includes Mallory over his last four years, Cam Cameron, Gerry DiNardo, and Bill Lynch.  Terry Hoeppner can’t be included because his death due to an especially virulent brain tumor ended what appeared to be the kind of evolution toward excellence (or at least legitimate mediocrity) that the Hoosiers have long sought.

At Purdue, the trail of tears has not been nearly as long since Tiller left after the 2008 season.  But the time after Jim Young won and prior to Tiller rejuvenating the Boilers included some dark seasons led by the likes of Leon Burtnett, Fred Akers, and Jim Colletto.

Firing coaches to replace them with other mediocre coaches is a brutal technique for building success, and so neither Glass nor Burke will follow that well-trod path.  The rebuild in Bloomington will continue for a fifth year under Kevin Wilson and a third year under Darrell Hazell.  And it should.

Both programs have inched forward, and Indiana’s woes this season were at least in part due to the left shoulder injury of starting quarterback Nate Sudfeld.  Some want to blame Wilson for the dearth of reasonable backups at that position because both Cam Coffman and Tre Roberson transferred after last season when it became clear that Sudfeld would be the quarterback for 2014.

My assumption is that Wilson told both Roberson and Coffman that there would be no open competition at quarterback – that Sudfeld had earned the starting spot and would be the leader in 2014 and beyond.  That transparent communication gave both young men the information they needed to make an informed decision, and that is what solid leaders provide those who follow them.

Would it have been nice to have either Coffman or Roberson around when Sudfeld was helped off the field with a season-ending injury?  Sure, but college students deserve better than a lie to keep them around just in case.

Will Indiana or Purdue ever be a routine competitor for a spot in the Big Ten Championship?  Of course not.  What has never happened is unlikely to start, regardless of the coach.  Occasional trips to bowls would be a sweet return on investment.  Expectations of success beyond that are just silly.  I want to earn millions of dollars, but because to this point I have not, the likelihood is reduced to near zero that it will ever happen.

Click here for a $1 comprehensive dental exam by the best dentist in Indiana – Dr. Mike O’Neil at Today’s Dentistry

Indiana and Purdue would quickly lose a coach so superb that he could get either program over the nearly insurmountable hump of a conference championship.  He would jump to even a mediocre job the SEC the second greatness was displayed.

The best possible result for either program would be to hire the coach that best embodies the decency and leadership needed to help the players trusted to his care make a successful leap from adolescence to manhood.  Fans should hope for onfield quality, and demand great people graduating.

Both Wilson and Hazell appear to be capable of leadership that can provide competitive football and a positive example for their players.

That’s enough for another year.

5 thoughts on “Despite disappointing seasons, Kevin Wilson and Darrell Hazell should continue to lead Indiana and Purdue Football”