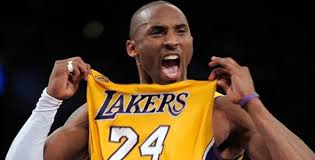 Someone needs to give Kobe Bryant a smack. That no one did at yesterday’s practice showed why the Lakers are 6-16.

Why the Los Angeles Lakers are 6-16 came very clear yesterday as video of Kobe Bryant was released showing the future hall of famer mocking, ripping, and demeaning his teammates during practice.

The reason the Lakers continue to suck has nothing to do with Bryant’s incessant yammering, and everything to do with the response – or lack of response – from teammates.  That no one had the balls to try to shut Bryant up is a tragedy of manhood lost.

Allowing another man to demean you in front of peers in the way Bryant did yesterday to Lin and Nick Young shows a lack of competitiveness that leads to abject failure on the court – or in business.

I’m not an advocate of throwing haymakers in conference rooms, but if a man treated you in the way Lin was, you would either act immediately to shut him the hell up – or you would face a future in your workplace where you felt and would be seen as emasculated.  And if it happens at a time and in a place where physical contact in the heat of battle is encouraged (like a basketball court), it’s go time.

As unpleasant as it can be to risk getting your ass kicked, there are times when that risk is the only option.

What a man does not do, especially on a team of men who are supposed to compete at the highest level in the world, is allow a teammate to get away with making you look weak, pitiful, and ashamed.

You take shots, and you are likely to receive some.  Maybe you take a beating, but you can’t allow anyone – especially a teammate – take your manhood.  If that sounds like caveman-speak that’s fine, but allowing a teammate to damage your self-respect and make you look weak in front of your team is not an option.

Not fighting back when bullied by Bryant shows a spiritual weakness that will cost wins when games are on the line against real opponents.  That Bryant is a legendary arrogant ass is beyond dispute, but he wasn’t in the wrong here.

We all would enjoy being part of a group that supports and loves one another.  Teams like that can revel in their togetherness and succeed, but in the face of a challenge to manhood, some guys run and some guys hide.  Teams filled with players that hide start seasons 6-16.

The Lakers suck, and they will continue to, but the reason is not Kobe Bryant being an egomaniacal boor.  It’s that no one on the Lakers has the balls to challenge him.  Because if Young and Lin aren’t willing to challenge Bryant in practice, what the hell are they going to do in games?