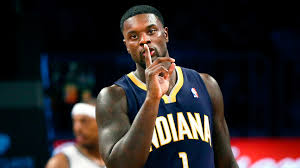 Pacers fans hoping for the return of Lance Stephenson will eventually quiet down and embrace Rodney Stuckey.

Watching Rodney Stuckey ring up 20 points, 10 rebounds, and seven assists in a dominating win against Kobe Bryant and the Los Angeles Lakers last night hammered home the notion that trading with the Charlotte Hornets to bring Lance Stephenson back to Indiana is silly.

The Pacers have an improved version of Stephenson in Stuckey.  Not as naturally gifted, but Stuckey is not consumed by the notion of his own success and his ability to provide for his family.

Stuckey is leading the Pacers in scoring, and is a more consistently focused defender, but fans continue to pine for the more charismatic Stephenson – a likable guy unafraid to ruffle feathers in very public ways.

Whether he was snatching rebounds from teammate Roy Hibbert in his nonsensical quests for meaningless triple doubles, blowing in LeBron James ear during the Eastern Conference Finals, or inviting the public to a pool party at his house via Twitter, Stephenson danced to the ragged beat of his own drummer.

I’m not employed by Pacers owner Herb Simon to keep track of his cash, but Stuckey earns $1,227,985 compared to Stephenson’s $9M to provide the Hornets 10.3 points, 7.0 boards, 4.9 assists per game, and a series of headaches that have the team eagerly phoning rival GMs to gauge their interest in the mercurial near all-star.

Stuckey doesn’t average as many rebounds (3.8) or assists (3.0) as Stephenson, but he leads the Pacers in scoring at 13.2 points per game.  Stephenson’s average last season was a very similar 13.8.

While the Pacers are having a tough time stringing together wins with a record of 8-17 as they careen toward the one-third point in the season, the reasons do not include Stephenson’s decision to abandon ship for $26 million less guaranteed money that what was reportedly offered by the Pacers, a team that understood and tolerated Stephenson’s quirks in order to access his massive reservoir of talent.

Stephenson’s decision to leave Indiana was baffling.  Less money at a new stop for a team unaccustomed to weirdness in exchange for the chance to opt out in two years as a new collective bargaining agreement is likely to be enacted represents the kind of silliness for which Stephenson became known in Indy.

Talk among fans about bringing Stephenson back is understandable.  Lance is a likable guy.  He was always a pleasure to talk to – always honest and funny, and oddly unimpressed by his own aura.  He was unafraid to show his emotions, and that made him accessible.

None of those are legitimate reasons to pull the trigger on a deal to facilitate his return.

Without George, the Pacers were going to struggle this season regardless of where Stephenson confounds his teammates.  That isn’t changing until 2015-2016.  Getting Hill back will help, but if the Pacers finish the season with 40 wins, Simon should have a banner made to celebrate that accomplishment.

Stephenson can continue to find ways to destroy his new team and diminish the value of the career that would have paid him $44 million as he waited for his max contract at the age of 28 in a place that knew him and allowed for his many quirks.