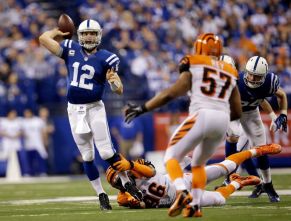 Let’s not sugar coat this, folks: The Colts beat an average football team Sunday. They don’t need to apologize for that – a win in the NFL Playoffs is a great win.

But the fact is the Bengals came into the game without # 2 wide receiver Marvin Jones (out all year), without #1 wide receiver and difference-maker A.J. Green, and without tight ends Tyler Eifert (out all but one quarter this year) and Jermaine Gresham.

Another fact is the Colts have the goal of doing more than winning this game. Had the Colts not won this game, there would be some serious and appropriate outrage today among the fan base. Losing this game at home to this Bengals team was not an option.

Andy Dalton is a popular quarterback to criticize. Marvin Lewis is a popular coach to criticize. But I’d choose another year to do so. The Bengals got the most out of what they had this season, particularly at the end. When a team has zero weapons down field and is nothing more than a one-dimensional running team like Cincinnati was Sunday, that doesn’t work too well in the NFL Playoffs.

Let’s also not sugar coat this: Andrew Luck is spectacular. The 36-yard TD pass to Donte Moncrief was everything that is Andrew Luck wrapped into one – strength, poise, athleticism, play-making ability. I immediately said to my son, “Look at that..THAT is why Luck is so special.”

Luck has also received some criticism this year for not taking care of the football. But without a running game half the year and a mediocre offensive line in a constant state of flux, I’d also choose another year to criticize Andrew Luck. I heard some critics late in the year, I did, as much as it made me shake my head with confusion. But I’d say he did a pretty good job of shutting them up Sunday.

No quarterback carries the burden of a team and covers up flaws more than Andrew Luck. Luck is the epitome of a team MVP.

Back to the game Sunday:

Make no mistake, I will take a win in the NFL any day and not apologize for it, particularly an NFL Playoffs win. The Colts played well enough Sunday and have every reason to feel good about once again being in the AFC semi-finals.

But people within and outside the organization talk about this team taking the next step this year. Can it win at Denver? Absolutely, the Colts can win at Denver. They certainly have a punchers chance. When you have a heavyweight like Andrew Luck, you are in every single game. I’d give the Colts a 33.3% chance to win Sunday. That may sound rough, but that’s simply the tale of the tape.

To beat the best in the playoffs takes fundamental, mistake-free football; something the Colts haven’t done against the best all season long (the 66.6% portion of the odds at Denver).

Denver is sputtering a little right now (by Denver standards). The Broncos are a little banged up. So the game is there for the Colts to win, IF the Colts play mistake-free football across the board. If the Colts go to Denver and win, it will be because they played better than they did Sunday and probably better all around than they have all year.