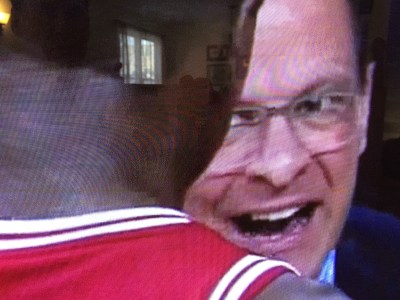 Indiana coach Tom Crean gets in the face of Hanner Mosquera-Perea during last night’s disappointing loss at Michigan State.

How soon hopeful Indiana fans forgot the manic depressive stylings of last year’s up and down squad as they excitedly awaited last night’s game against Michigan State in East Lansing.

The tide had turned, or had it?  Not so much as Indiana lost to unheralded Northwestern the following Saturday.  All was lost, or was it?  Not so much – again – as the Hoosiers hammered #10 Michigan on February 2nd.

Three straight losses to Minnesota, Penn State, and Purdue came next, and Indiana basketball fans finally threw up their hands and decided this team caused them too much emotional upheaval to either cheer or boo.

It’s a shame because the Hoosiers then beat consecutive ranked opponents #20 Iowa and #22 Ohio State before dropping their last three against Nebraska, Michigan, and Illinois.

Less than a half mile due south of Assembly Hall sits IU’s Psychology Building, a place where I learned how to predict the behavior of mice.  The professors and research specialists who office there could have walked a couple hundred yards north and authored a study on inconsistency based upon the 2013-2014 Hoosiers.

It looks like that work could continue this season as figuring out which Indiana team will show up on a nightly basis is again proving a vexing proposition.

Fortunately for everyone associated with Indiana Basketball, inconsistency seems to be a core competency throughout the Big Ten.  The Michigan State team that dominated and humbled the Hoosiers last night has five losses, including one at home against the barnstorming Texas Southern Tigers of former IU coach Mike Davis.

Delivering upon expectations is job one for a basketball coach and team, and Indiana has been resolute and maddening in both exceeding and failing to get that done.

That’s not just from a result perspective but in effort and execution too.  Last night’s game was an exercise in futility where Indiana was out-everythinged.  Michigan State’s effort was tremendous, and Indiana’s feet on defense could not have been slower.

The result was brutal to watch.  I’m not sure how many dunks Michigan State had, but the Spartans only hit 28 shots on the night – five of which were three-pointers – so it couldn’t have been more than 23.

Because of Indiana’s win at Nebraska to open the Big Ten season, fans saw the Michigan State game as a chance to get a jump on the conference race with two wins at home.  With last night’s 70-50 drubbing (and it wasn’t that close) fresh in the minds of fans, the Ohio State game Saturday at Noon will be seen as a potential for embarrassment, but it’s as likely as not the Hoosiers will rebound to play very well against the #22 Buckeyes.

There is talent and intellect in Bloomington – enough to win – and that is the difficult part of the equation to swallow for fans.  Sometimes good, sometimes terrible, Indiana’s wobbly play leaves fans without a plausible explanation or reasonable expectation for either.

For those who are sure the end for the Hoosiers is nigh, remember that Hanner Mosquera-Perea is capable of excellence and James Blackmon is going to find his range eventually.  For those who expect Indiana to get to the Sweet Sixteen, remember they don’t have a senior, size, or discernible collective will.

At 11-4, Indiana could mature and become a first division Big Ten team, or collapse and dive to the bottom of the standings.  The most likely scenario as the 2015 Big Ten season unfolds is for Indiana to win some games it shouldn’t, lose some it should win, and wind up in the middle somewhere.

Is that enough for fans, and will whatever happens this season give fans reason for hope in 2015-2016?  While developing and fulfilling expectations is job one for a coach, instilling hope – especially for a supposedly elite program like Indiana – is job 1-A.

Without hope, ticket sales falter, donations dwindle, and indifference sets in.  It’s not dislike that inspires change in leadership; it’s malaise in a fan base.

In Bloomington, enthusiasm needs to be reinstilled – and fast.

Is that blue sky on the horizon or dark storm clouds?  Whatever your guess, it’s likely wrong.

9 thoughts on “Indiana Basketball – Given loss to Michigan State, get used to excellence and inferiority in equal measure”