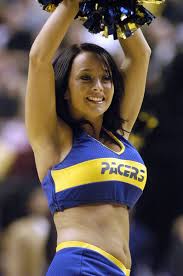 The scenery at Pacers games wasn’t all bad during last night’s loss, but for great basketball, it’s good there are options out there.

Watching mildly talented men play basketball with indifference is not how I want to spend my time, so unless the Pacers find a way to , regain health, start playing with a little determination, and catch fire I’m going to focus my energy on watching Butler, Purdue, Indiana, and whatever high school games I can find.

Last night’s 110-101 loss to the woeful Minnesota Timberwolves was the last straw.  The T-Wolves had posted one win since the day after Thanksgiving, and wandered into Bankers Life Fieldhouse as one of the opponents the Pacers should easily vanquish as they try to build enough wins to squeeze into the eighth playoff seed in the Eastern Conference.

Mo Williams dropped 52 on the heads of the Pacers, and the game was lost.  Mo Williams?  Mo Freaking Williams?  Coach Frank Vogel was a nice guy not to put Shayne Whittington into the game to throw Williams into the third row to knock him out of rhythm.  That kind of tactic is what my Dad always advised.  No one would have scored 30 in an NBA game, a hat trick in hockey, hit three home runs in baseball, or scored four touchdowns in football with Dad running the show on the opposite bench because he would have employed a thug to hospitalize him.  Dad would have been a good pro coach for a week and then banned from sports and incarcerated as an unrepentant purveyor of pain.

It’s not that the Pacers don’t want to be good.  I get that.  Injuries have corrupted their ability to compete at a high level, and minus witchcraft there is little to be done to reverse injuries.  As much as C.J. Miles would like to be Paul George and Donald Sloan dreams of athletic gifts bestowed upon George Hill, they are who they are.  And what the Pacers are right now is 15-25 – 10th in the East.

But that doesn’t mean I have to choose to watch the Pacers at the expense of a Butler, Indiana, or high school game like I did last night.  Last night, central Indiana hoops fans had a choice to watch the Pacers, Indiana, Butler, or attend one of the opening round games of the ultra competitive Marion County High school Basketball Tournament.

Butler’s OT win against Seton Hall is a big deal and brought the Bulldogs a third win in the Big East, which ties them with the five other teams at the top of the conference.  The Big East is good, not great – just like Butler.

Indiana beat lowly Penn State last night by only three at Assembly Hall, but there is no reason for Tom Crean to apologize for a win that was a fraction of a second from going to overtime when a Nittany Lions tying triple was released just after the buzzer.  A win is a win, and now Indiana is in a five-way tie for the Big Ten lead with a 3-1 record.

Guessing which Purdue, Indiana or Butler team will show up from night to night defies all Haitian voodoo and the skill of the finest Tarot card reader on the subcontinent, but that beats the relentlessly milquetoast results of the Pacers.

And you can do much worse than rolling out on a cold night to watch high school basketball in Indiana.  There are exceptionally talented kids from this area who will play in the Big Ten, Big East, and ACC, and the Marion County Tourney is full of them.

I’m all for the Pacers, but the last two losses to terrible teams like the 76ers and T-Wolves have pushed me to recalibrate my priorities, and that means more Indiana, Butler, Purdue, and high school hoops.  It’s always good to have options.

Nothing personal, but without a healthy and competitive Pacers team, choices need be made.