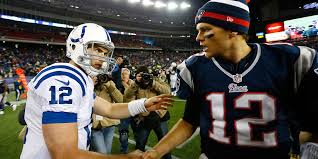 When the Colts beat the Patriots Sunday, this handshake will be more than two great quarterbacks acknowledging each other – it will mark the passing of a torch.

Sunday’s AFC Championship will send one of two flawed teams to the Super Bowl.  Which one, we don’t know.  That’s why America will be riveted to this matchup with generational undertones.  There are so many unknowns that projecting an outcome is silly, although I’ll do it today on my radio show (3p-6p CBS Sports 1430) and at the end of this post because that’s part of the fun.

Football isn’t rocket science.  There is no denying that Patriots coach Bill Belichick is a really smart guy, but the game will likely be determined by which of the two teams win the battle at the line of scrimmage.  Scheme plays a role, but which group – coaches or quarterbacks – is more important the success of the four semifinalists for the Vince Lombardi Trophy?

All that being said, here are the five variables that will determine the winner of Sunday night’s matchup:

Special Teams –  In a close game between two mostly equal teams, field position and field goals are crucial.  No one in the NFL affects field position in a more profoundly positive way than punter/kicker Pat McAfee.  In 96 kickoffs, McAfee has converted 70 touchbacks.  His punting has been superb throughout the season with the fourth best net yards per punt average in the NFL.  His 42.7 average is eight inches short of the league lead.  Adam Vinatieri made every single field goal he attempted until the final game of the regular season, and has never lost during a conference championship game.

For the Patriots, they aren’t chopped liver either.  Kicker Stephen Gostkowski was 35-37 during the regular season, but his touchback percentage is only 54%.  Punter Ryan Allen is average at best, and had a kick blocked this season while bombing the ball into the end zone for a touchback twice as often as McAfee.

Rob Gronkowski vs. D’Qwell Jackson – This matchup is a loss for the Colts, and if at any point a Belichick/Josh McDaniels scheme causes Jackson to be singled up on Gronk, the result could be game-changing.  Gronk is the one receiver in the passing game that demands constant attention, and not from Jackson, whose worst game of the season as graded by profootballfocus.com was – you guessed it – against the New England Patriots.

Weather – Right now, the forecast for Foxborough is for a 90% chance of rain and a temperature in the low 40s.  The logical guess is that bad weather favors the team who plays in it most often, and that is the Patriots by virtue other roofless stadium.  The wind could also kick up, and that would mean trouble for the Colts, who like to keep safeties honest through the threat of the kind of deep ball the elements can make difficult to execute.

Tom Brady is rarely bad at home – Throughout the 2014 season, Brady (minus a meaningless game in Week 17 where he took less than half of the snaps) never failed to post a 90 or better passer rating.  He is not likely to be the reason the Patriots lose.  The only way to neutralize him is to get pressure with four rushers.  Without pressure, his passer rating is 113.3.  With pressure, it’s 53.4.  When blitzed, his passer rating is 96.9.  You do the math.  Pressure minus the blitz is where Brady is worst – not exactly a surprise.

There are few quarterbacks who can extend a play and execute it for big yards like Andrew Luck.  There are no pressure scenarios where Luck underperforms.  Under pressure – passer rating of 80.7; no pressure – 103.2; when blitzed – 111.7; not blitzed 88.6.  On the road, Luck can be as good as he is at home with 100+ passer rating games in four home and three road tilts.

Andrew Luck’s receivers need to hold onto the ball –  Andrew Luck leads the NFL in dropped passes with 38.  The ability for receivers to secure the ball, especially in adverse weather is key to keeping the chains moving and staying on schedule.  There have also been a number of drops and balls tipped by Colts receivers that have resulted in interceptions.  Turnovers are an obvious key to any NFL game, but with teams this well match it is critical to play a clean game.

Mistakes during key moments will likely be what causes doom for either the Colts or Patriots.  The Colts are executing with great confidence and will travel today to Massachusetts believing they will win.  The Patriots suffer from no lack of confidence.

I have two predictions.  One for good weather, and another for rain.  If the field is dry, the Colts win 37-35 on a last minute Vinatieri field goal.  If it rains, the Colts win 19-17.  Either way, I like the Colts to pull the upset by two on a late kick because I root for great poetry, and what would be more poetic than Vinatieri banging a kick through the uprights in that stadium to launch his team into the Super Bowl.