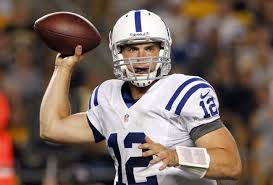 Andrew Luck had a tough time last night in the AFC Championship, but job one for Ryan Grigson is to sign Luck to a deal that both pleases Luck, but allows the Colts to continue to evolve elsewhere.

The AFC Championship was an ugly waste of nearly four hours for Indianapolis Colts fans, but for the brain trust charged with continually evaluating and improving the roster, it was an accurate snapshot of where they are and where they need to go.

Reports of deflated balls aside (could that have helped the Patriots dominate as they did in the trenches) Bill Belichick’s New England Patriots were annoyingly superb throughout, forcing the Colts into uncomfortable circumstances that resulted in game changing mistakes.

Teams can’t achieve greatness until they are ready for it, and yesterday the Colts showed themselves unready to move forward toward hanging a second banner from the rafters of Lucas Oil Stadium.  From Josh Cribbs taking a punt off his face as he tried to fair catch it to a multitude of dropped and errant passes to a defense that was not capable of stopping anything or anyone, this game showed the warts that the Colts had successfully overcome to reach the semifinals of professional football.

Attention on 56th Street now turns to the task of retooling so being embarrassed by Belichick doesn’t happen again, which should be plenty to keep owner Jim Irsay, GM Ryan Grigson, and coach Chuck Pagano occupied for the next four months.

First up is putting the finishing touches on a contract extension that will keep quarterback Andrew Luck in Indianapolis for the foreseeable future.  Bringing back Luck is a no-brainer, but how to do it so his contract allows the Colts to improve elsewhere will be the challenge.

Right now, the Colts have approximately $109 million committed to contracts for 2015, according to sportrac.com.  The cap is projected at $140 million.  That leaves $31 million for free agents, the 2015 draft class, and extending Luck.

Some of the work is fairly simple.  Cribbs earned an opportunity to retire after yesterday’s muffed punt.  Wayne and Redding may choose to retire.  Bradshaw is an oft-injured 29 year-old at a position where 30 is retirement age for most.  Adams will turn 34 five days after Bradshaw’s birthday, and while he played well, safeties can be had cheap.  Nicks was likely not thrilled with his level of use, and may seek to build value somewhere else.

On the plus side, Robert Mathis’ return could provide great dividends demand upon his recovery from a torn achilles and what amount of football he has left in his tank.  He’s about to turn 34, but an old Mathis is a hell of a lot better than no Mathis.

That leaves Brown, Reitz, Hasselbeck, and Butler as targets that need to be retained, and areas of concern that outnumber areas of strength.

The Colts have each of their picks in the first six rounds of the 2015 Draft, and will draft 29th.  They might as well draft the best player available because for a team that just went to the AFC Championship, they have needs almost everywhere.

Minus quarterback, cornerback, and wide receiver, where could Grigson and company feel good – especially after yesterday?

That’s the bonus of playing against Belichick.  He is going to expose your weaknesses, and make you feel a little less good than you did prior to the game.

Here are the strengths of the Colts:

Quarterback – Despite Luck’s miserable (Andy Dalton-esque) stats yesterday in the rain and wind (12-33 for 126 yards, 0 TDs, two picks, and a passer rating of 23), there is no doubt he is the future of the franchise.

Cornerbacks – Vontae Davis and Greg Toler might be the best tandem of corners in the NFL.

Wide receiver – T.Y. Hilton is elite, and Donte Moncrief could be a great bookend for a decade.

Tight ends – Coby Fleener and Dwayne Allen need to hold onto the ball a bit better, but they provide solid options for Luck.

Special teams – Pat McAfee, Adam Vinatieri, and Matt Overton are as good as it gets.

Offensive line – The shuffling of the line (minus Anthony Castonzo) spoke to the mediocrity of the other four spots.  Maybe Khaled Holmes develops into a longterm solution at center.  Maybe Gosder Cherilus regains health and protects Luck’s front side as well as Castonzo has his back.  Lots of maybes.

Defensive Line – Counting the outside linebackers as defensive linemen here, Bjorn Werner was reportedly a healthy scratch yesterday, and if Redding retires, Mathis must return to form or pressure on a quarterback will be difficult to imagine from this group.  If stopping the run is where they choose to hang their hats, yesterday showed they are a long way from being who they thought they were.

Running Backs – Trent Richardson costs the Colts the same amount of cash in 2015 whether he’s on the roster or not, so expect him to be back unless Grigson can find a GM willing to trade for him.  (There is a joke lurking there somewhere, but why be cruel on a day like today?)  Neither Boom Herron nor Zurlon Tipton qualify as reasonable solutions to a problem that has plagued the Colts since Edgerrin James left for Arizona.

When your two chief deficiencies are at the line of scrimmage, there is some remedial work to do.

As much better the Colts are compared to their AFC South rivals is roughly the same as the gap between the Colts and the Patriots – although in the opposite direction.

With a great offseason, the Colts will close the gap on the Patriots, and might take yet another step forward next year.  A bad offseason could throw this rebuild into reverse.

This might be the most important offseason of Grigson’s career.