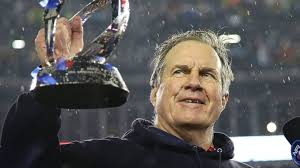 Bill Belichick holds a trophy that is so important to him that the NFL is investigating whether he cheated to win it.

Deflategate is not about who won or lost the AFC Championship game Sunday night.  The New England Patriots would have throttled the Indianapolis Colts if the game was played with boulders, a taped up bath towel, or a toaster oven instead of a football.

The Patriots were the better and tougher team – period.

But if the Patriots violated NFL rules by deflating the footballs their offense used, this would simply be the latest incident where a Bill Belichick coached team violated rules to gain an advantage, and the NFL must bring down a heavy hammer on the coach.

Some might applaud Belichick’s win at all costs, rules be damned, to hell with balanced competition outlook on football and life.  “Greed is good,” the morally bankrupt Gordon Gekko said in Wall Street. “Winning isn’t everything; it’s the only thing,” Vince Lombardi claimed, and then regretted.  “A champion is afraid of losing; everyone else is afraid of winning,” Billie Jean King lent to the conversation.  “Boom, crush. Night, losers. Winning, duh,”  came from the always entertaining but psychotic Charlie Sheen.

Yeah, okay.  Winning is the point of playing the game, but winning is supposed to be a validation of a culture, determination, and will.  What it should never be is a test to determine who is better at off-field subterfuge, deceit, and slight of hand.

Spygate was a great example of a team working outside the rules to affect a change in the competitive balance.  Videotaping practices before a Super Bowl (and if you don’t think that happened before the Patriots played the Rams in SuperBowl 36, you haven’t spoken to Mike Martz about how the Rams used formations they had only used once or twice in practice that the Patriots were oddly prepared to defend) or in-game signals to gather intelligence to be used in later games has never been allowed by the NFL, but that didn’t stop the Belichick and the Patriots.

If Belichick authorized some ballboy to take air out of footballs on the Patriots’ sidelines, he will have proven himself to be intractable in his compulsion to win regardless of the rules, and that drive must be addressed in a serious way by the league.

Given the $500K fine levied against Belichick, $250K against the Patriots, and the loss of a first round draft pick for Spygate, the time has come for the NFL to bring a consequence to bear against Belichick that will get his attention.  That penalty should be a one-year suspension.

Belichick would have undoubtedly made an outstanding military leader, and I can’t imagine a football coach I would rather have lead an army in a battle to the death to defend the American way of life.  Rules be damned there.  Espionage is a crucial part of the equation, and successful covert activity should be applauded.  But this is football, and the winner and loser of a game has no bearing on anyone’s survival.

The saddest part of the litany of deceit that continues to emanate from the Patriots under Belichick is that it appears to have been completely unnecessary.  The Patriots have been the best team in the NFL over the past 15 years regardless of the rules they have contorted, manipulated, corrupted, or eviscerated.

Belichick is a master at organization and preparation, and needs to break NFL rules to win games like a hunter needs a scope on his rifle to shoot caged deer.

The NFL needs to put a stop to the madness in Foxborough – if Belichick is found culpable in Deflategate.  At this point, fans have every reason to believe that Belichick is corrupting rules on a weekly basis to alter the competitive balance of the NFL, and that can’t allowed to stand.

And if I’m employed by the Baltimore Ravens, I’ve spent the past 36 hours scouring whatever videotape exists of the pregame activities on the Patriots sideline prior to the divisional round playoff game so narrowly lost by the Ravens in Foxborough.

If he’s guilty of authorizing the deflation of football Sunday, can anyone in his or her right mind believe this is the first time Belichick has given this gambit a whirl?

One thought on “Deflategate – If guilty, Patriots Bill Belichick should be banned by the NFL for one year – at least”