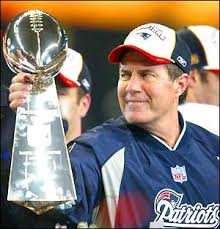 Why would the NFL continue to allow an unrepentant cheat to continue to function in a leadership role rather than make an example of his behavior that will last a century?

There are undoubtedly NFL teams that look for any advantage they can gain within the rules, and a few that stretch their search into those realms that lie outside restrictions imposed by the NFL.

If the NFL doesn’t bring down a massive hammer against the New England Patriots franchise that appears to be the most aggressive in stretching all rules and breaking many, the number of teams willing to ignore the rules as part of their preparation for competing will likely expand to include all 32.

Coaches and general managers get paid a lot of money to win games (coach Bill Belichick takes home $7.5 million less taxes,according to Forbes), and if the NFL sticks to their playbook of exacting a half-million dollar fine here and a draft pick there, the disincentive won’t come anywhere close to the reward for cheating.

This morning, ESPN’s Chris Mortensen reported that 11-of-12 footballs used by the Patriots were uniformly deflated to 10 pounds per square inch from the 12.5-13.5 range that is required by rule.

The question that the NFL will answer with their finding in the ongoing investigation and the subsequent punishment levied will be whether cheating is part of the price of doing business or whether it is serious about ensuring a level playing field in competition.

As I complained about getting a speeding ticket a few years ago, a guy told me to relax.  He said my fine was nothing more than a speed tax – the price I paid for driving as fast as I liked.  If Belichick is dinged with another $500,000 fine (the same amount as his Spygate fine), it’s nothing more than his cheat tax.  That’s not a behavior changing consequence; it’s the cost of ensuring his ability to continue to earn the $7.5M.

While everyone in the media is losing their minds about what happened in Foxborough, does anyone believe this is the first time balls used by the Patriots offense have been softened?  I guarantee you that the Baltimore Ravens are pouring over videotape of the previous weekend’s Divisional Round playoff game, and they should.  While the result of the Colts vs.Patriots game had nothing to do with easy squeeze and control footballs, the game against the Ravens was damn close.  And what about the other rules that exist to ensure fair competition?

This might be the only rule the Patriots have broken since Spygate, but that seems ludicrous.  And anyone who believes Spygate doesn’t extend back to Super Bowl 36 needs to have a conversation with Mike Martz about pre-snap adjustments the Patriots made during that game to formations the Rams had never before used.

Either the NFL will standup in front of fans during Super Bowl week and claim that rules matter or that they don’t.  By allowing Belichick to continue to operate in a leadership position, the NFL will admit complicity in devaluing the rule book, and will acknowledge that he who cheats best gets an advantage on Sunday.

The only meaningful consequence for anyone is to take away what the violator loves most.  For a child, it might be a toy.  For a teen, grab the smart phone.  For someone without money, take money.  For Belichick, who loves football and being the coach of the Patriots, remove him from that position for a full season.

Bringing down the hammer on Belichick will have two effects – he learns his lesson, and the 31 other head coaches will also learn that lesson.

When eight members of the 1919 Chicago White Sox conspired to throw the World Series in exchange for payoffs from gamblers, Major League Baseball banned them for life as a message to anyone else tempted to dump a game.  That act 95 years ago still resonates in clubhouses across baseball.

The time is right for the National Football League to send strongly communicate that rules mean something, and there is no one more deserving of being the target of such a message than Bill Belichick.

5 thoughts on “Bill Belichick is the NFL’s version of the 1919 Chicago Black Sox, and he should be suspended from the game”