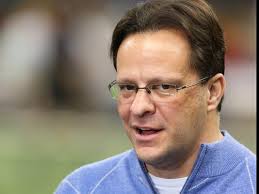 If Tom Crean looks like a guy who knows more than he’s showing, it’s because this season he does.

When the 2014-2015 season started, college basketball analysts assumed Indiana would be a very mediocre Big Ten team, lacking size and cohesiveness.  Well, they were half right.

The Hoosiers are undersized, especially since the injury to Hanner Mosquera-Perea, but they play with trust and togetherness.  That has been enough to make Indiana very relevant through five conference games as they have put together a 4-1 record – tied for first in the loss column with Wisconsin and Maryland.

Thought to be a bubble team at best, Indiana is now projected by a variety of bracketologists as an eight or nine seed in the NCAA Tournament, and is now ranked 23rd in the country.

This is all very good news for Tom Crean who entered the season standing in the middle of a frozen Bloomington pond as a warm wind blew from Bedford.  Conversations about the buyout Indiana would be required to pay in order to replace him were rampant, and the assumption was that this season would be it for Crean – if he made it that long.  Players managing to make it through March without another arrest, suspension, or injury are still a prerequisite to survival, but talk has turned from banishment to seeding.

Being a coach is a tough gig.  If the team overachieves compared to its talent level, coaches can either be viewed as miracle workers or the architects of the roster that required the miracle to be worked.  The opposite can also be true.  Coaches with a stacked roster who occasionally lose are viewed as underachievers.

Crean has been on both sides of the fence in less than two years.  In 2013, Indiana was ranked #1 for most of the season with a roster sporting two of the top four members of the 2013 NBA Draft class.  Indiana loses to Syracuse, and fans went crazy about how this team underachieved.  This year, the roster is short on height, and expectations were adjusted accordingly.  At 4-1 in the Big Ten, fans see the Hoosiers as scrappy overachievers.

So where does that leave Crean?  Doing everything he can to pile up as many wins as he can because at some point people who matter are going to look at the state of the Indiana program and decide it’s not at the elite level fans require.  Crean would like that to happen in 2027.

The seven games beginning tonight will go a long way toward telling the tale of the 2015 Big Ten season – vs. Maryland (tonight), @ Ohio State, @ Purdue, vs. Rutgers, @ Wisconsin, vs. Michigan, and @ Maryland.  Only the home game against Rutgers can be assumed to be a win.

If the Hoosiers finish that run of tough games 4-3 to build their season Big Ten record to 8-4, that would be a hell of a thing, and regardless of personal qualms about Crean it would be impossible to view him as anything but a very solid coach at this point in time.

The metric that gets coaches fired is a consistent failure to achieve to the level of expectations, and no one to this point can declare Crean guilty of that in 2015.

Indiana is better than anyone had a right to believe they would be, and a big chunk of the credit for that belongs to Crean.  A win tonight against the #13 team in the country would be even more impressive.

Fans want Indiana’s wins against a #13 team to be expected – especially at Assembly Hall.  Crean’s Hoosiers aren’t there yet.  But they’re still better than anyone thought they would be – and that is a great place to be for Crean and the Hoosiers.