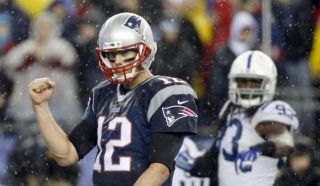 Let’s make one thing clear: No one blames the Indianapolis Colts throttling at the hands of the New England Patriots on deflated footballs. Most Colts fans and Indy media are more concerned with with coaching/personnel/in-ability to make adjustments – any adjustment – that led to the embarrassment of a conference title game. And it was just that, an embarrassment. Julien Edelman is still running across the middle wide open. Tom Brady could have thrown a badminton birdie at him and completed those passes.

So what is this deflating of the footballs thing all about then? Well, what’s at stake is the credibility and integrity of the NFL. It’s that simple. Fans already don’t trust the league and how it deals with issues.

They’re frustrated with a league that over-legislates the game so much we have to have a lengthy explanation of why what we saw – one of the greatest Playoffs catches of all-time (Dez Bryant) – wasn’t really what we saw. Why we don’t really know a textbook clean hit from a personal foul anymore.

And then we get to how the league handles off-field incidents. If they’re not destroying video tapes before media can see them (the Patriots Spygate tapes), they’re claiming to have never received tapes (the Ray Rice elevator tapes).

So, excuse the fans and media for a moment if we’re all just a little skeptical of how this is all going to play out. Hey, NFL, you made your own bed.

Despite what you may think is a serious violation, cheating is cheating and it’s worse when it’s a repeat offense (if found guilty, of course.). The bottom line is, credibility is at play here.  Fans don’t trust the Patriots. They’ve been caught cheating before and I think it’s safe to assume they’ve done it other times – the Ravens reportedly tipped the Colts off to this whole deflating footballs thing. It’s like a player who gets caught smoking marijuana twice. What, those were the only two times? Come on.

If you want to spend time arguing whether this latest offense is serious or not, have at it. The bottom line is they’ve been caught before and they’ve possibly been caught again (something clearly is amiss, we’re just not sure who exactly to blame). Cheating is part of sports, no doubt. It always has been and always will be. But if you get caught, you get caught. And why the Patriots would risk what should be a glowing legacy is beyond me. But they have, according to Dan Shaugnessy of The Boston Globe.

But saying “everyone does it” isn’t an excuse. We go to that card far too often these days for rules breakers and law breakers. You get caught, you suffer the consequences. There’s nothing wrong with that. Dan Dakich mentioned on his daily radio show that all we do these days is make excuses for people. He’s absolutely right. Let’s get back to dealing with consequences.

Should this be a scandal? No, it’s a rules violation and should be treated as such. There should be consequences, for whomever is at fault. Levy the penalty swiftly and let’s move on.

A player gets suspended four games for a second offense of getting caught with marijuana in his system; a full season for a third offense. That’s for an individual’s offense – a personal offense. Yet, we’re going to let violations that involve the integrity of the game slide? Sean Payton was suspended for a year for Bountygate.

The growing perception among fans is they don’t trust the governance of the league. They know Bob Kraft and Roger Goodell are buddies. And Goodell also didn’t win over anyone  – media or fans – with the handling of the Ray Rice situation.

7 thoughts on “Deflated Footballs Not About a Game, It’s About Integrity of the Game.”