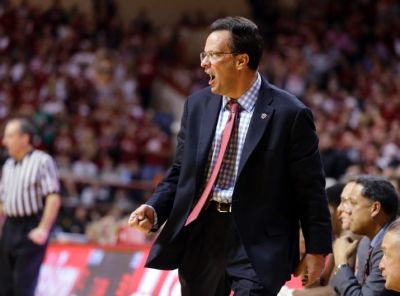 Tom Crean has finally got it rolling in Bloomington as the Hoosiers are again fun to watch.

Indiana basketball coach Tom Crean went to sleep last night smiling.  All but the nuttiest critics of his leadership in Bloomington had finally fallen silent.

If you went into the 2014-2015 college basketball season believing that Crean was months away from being the latest former coach at IU and that Brad Stevens needed to be pursued immediately as the next hope to resuscitate the Hoosiers, those thoughts dimmed substantially last night as Indiana ran and shot Maryland out of Assembly Hall 89-70.

Not only is Indiana winning, they are fun as hell to watch.  For the first time in a couple of years Indiana players appear to be more interested in how many points the team scores rather than padding their own stats, and their defense tends toward grit rather than a necessary bother between offensive possessions.

Credit for the new attitude in Bloomington should be shared among many, but Crean deserves a prominent spot in that long line.  If Crean is responsible for failure, he should be credited for success.

The ball changes hands quickly, movement is purposeful, and the style of play is finally reminiscent of Indiana Basketball.

Three months ago, Crean was reeling.  A spate of arrests, suspensions, and the brain injury of Devin Davis gave reason for fans to believe the Hoosiers were a renegade outfit more concerned with partying than winning, and even reasonable fans demanded change in leadership.

Last season’s 17-15 record didn’t help, and neither did an early season loss to Eastern Washington at Assembly Hall.  A non-conference schedule of cupcakes goes from being an annoyance to a motivation for hysteria when they result in losses.

At Illinois, Indiana appeared to be having fun playing basketball, and that continued last night.  There was very little chest thumping, only a couple of smiles, and little in the way of anything that could be construed as self-congratulatory posturing.

Indiana seemed more interested last night in the next possession than the previous one, and that marks a very different psychological state for the Hoosiers from what infuriated fans last year.

And the shooting was more like the film Pleasantville, where no shot missed, as it was like any Indiana performance since the Elite Eight game in the 2002 NCAA Tournament against Kent State when Tom Coverdale, Jared Jeffries, Dane Fife, Kyle Hornsby,and the Hoosiers combined to hit 15-19 triples.

Great shooting masks problems, and lack of size is going to be an issue eventually (or why would coaches insist on recruiting tall young men to play), but right now Indiana is a wonderful team to watch.

As a result, Crean appears to be quite safe in his position.  If the program Crean rebuilt is eroding, it wasn’t apparent last night.  While the vibe among recruits has been less enthusiastic over the past year or two, playing basketball the right way with enthusiasm doesn’t just win games – it makes kids want to be a part of that atmosphere.

Indiana athletic director Fred Glass has been resolute in his support of Crean, even during the darkest times, and that confidence has been validated – not only by the wins, but by the level of execution and lack of extracurricular mayhem.

Crean’s hold on the job remains tenuous – likely one more event that cements the image of an out of control culture in Bloomington from being dispatched – but for the first time in years it became apparent that Crean is part of the solution at Indiana rather than an obstacle for talented players to overcome.

In seven years, we have seen development of players occur at a high level, recruiting succeed sporadically, and game planning raise questions.  Over the last month, we have finally watched Indiana play like an Indiana team – with focus, crispness, generosity, and a desire to raise the level of play for the other four guys on the court.

The light at the end of the tunnel is finally visible, and it’s closer than any reasonable person had a right to hope three months ago.