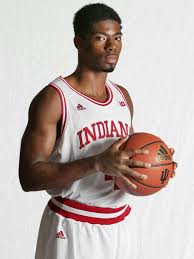 That Robert Johnson may be forced to miss time because of an injury caused by a folder being left just beyond the baseline by an Ohio State cheerleader is evidence enough to move non-essential personnel off the baseline.

Please understand this is not a lament about a reason the Hoosiers lost to Ohio State yesterday in Columbus.  Indiana lost because its defense sucked.

Allowing Ohio State players to catch and finish without resistance led to them hitting 62.3% of their field goal attempts, and beating a team that shoots better than 60% is almost impossible.

This is about the continued encroachment of non-essential basketball personnel being allowed close enough to the players that injuries are a near certainty.  Photographers and cheerleaders crowding the baseline has been allowed for years, and the time has come to put them back where they belong – out of harm’s way.

Indiana wing Robert Johnson converted a layup yesterday in the first half, landed on a folder left by a cheerleader, and his knee gave.  Coach Tom Crean was forced to remove him from the game, and despite returning for a few minutes in the second half his status for a huge game Wednesday night at Purdue is not known.

A far worse incident occurred during a USA Basketball scrimmage during the summer when Paul George landed awkwardly because the standard was unusually close to the baseline.  His tibia and fibula snapped, and a full season of his career has been lost.  A Pacers team that was believed to have a chance to make it to the NBA Finals now sports a record of 16-30 in a season most believe is lost.

The situations for Johnson and George were different, but both underscore the need for the baseline to be clear of obstructions for the well-being of the players.

I spent a night in the Kohl Center a couple of years ago with a photog credential sitting on the baseline, and was in constant fear that even well behind the line that supposedly separated us from the players and referees I was going to cause mayhem.

Ed Hightower officiated that night, and he never crossed the line, but he came within an inch of my feet on a dozen different occasions.  He had been at it for 30 years and knew how to avoid spraining an ankle on the feet of guys sitting cross-legged trying to do their jobs, but players crossed the line constantly because their momentum carried them outside the parameters of the playing floor.

I was in almost constant motion as a I tried to do my job while also not corrupting Hightower’s ability to earn a living.

While college and professional basketball enjoy the up-close coverage provided by those who squat in quiet anonymity just beyond the baseline and from the excitement generated by the cheerleaders, players’ and officials’ health can be jeopardized by that proximity.  Changes need to be made.

Hopefully, Johnson is able to return Wednesday, but regardless, college and professional basketball needs to remove feet, folders, chairs, and pom-poms from the wooden playing surface.  And the standard for the basket needs to be kept at a safe and uniform distance.

Health should never knowingly be jeopardized to facilitate media coverage and cheerleader interaction.

One thought on “Indiana Basketball – After Robert Johnson’s injury, time has come to get people and stuff off baseline”