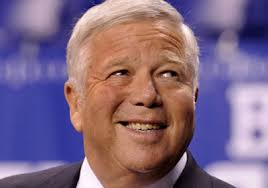 Patriots owner Bob Kraft is all smiles until he isn’t, and then you better sit still and listen if you are NFL commish Roger Goodell.

There are two ways to amass great wealth – inheritance and balls.

New England Patriots owner Robert Kraft put the second of those points of differentiation on display yesterday in front of the media gathered in Arizona for the Super Bowl.

Net worth is a scorecard in life that has nothing whatsoever to do with decency, compassion, empathy, and character.  It’s a race to cash, and as is the case with all races, advantage is granted to those displaying behaviors most are unwilling to allow themselves.

Great risk equals great reward (or great failure), and the cool thing about the pursuit of financial success is that failures are immaterial as long as success is achieved once.  People with balls refuse to fear failure because they see it as a necessary milepost on the road to success.

If rich people appear to be wired differently, it’s because most who made their own money are.  And Kraft clawed his way from from an apartment in Brookline, Massachusetts, to be the billionaire he is.

That means when you tangle with Kraft, you will almost certainly lose.  He sits in meetings every day and never blinks because if he does, rivals and subordinates will see it as a sign of weakness.  Kraft knows that virtually everyone with whom he has contact covets what is his.

Those relentless interactions tend to steel nerves, and at the age of 73, Kraft has been around the block again and again.

Because of his background and success, it should have come as no surprise last night when Kraft laid down the law on Deflategate, basically daring NFL commissioner Roger Goodell to continue to press the issue with his investigation, “I want to make it clear that I believe unconditionally that the New England Patriots have done nothing inappropriate in this process that were in violation of NFL rules.

“(Tom Brady, coach Bill Belichick) and I have been together for 15 years,” Kraft continued.  “They are my guys. They are part of my family, and Bill, Tom and I have had many difficult discussions over the years, and I have never known them to lie to me. That is why I am confident in saying what I just said. It bothers me greatly that their reputations and integrity, and by association, that of our team, has been called into question this past week.”

He was on a roll and had one final volley to lob directly at Goodell, “I am disappointed in the way this entire matter has been handled and reported upon. We expect hard facts as opposed to circumstantial leaked evidence to drive the conclusion of this investigation…  If the Wells investigation is not able to definitively determine that our organization tampered with the air pressure of the footballs, I would expect and hope the league would apologize to our entire team, and in particular, coach Belichick and Tom Brady for what they have had to endure this past week.”

There you go.  Think Goodell and Kraft being pals means a damn thing to Kraft.  Some men gather friends; some gather cash.  Few indulge in both.  Goodell is nothing but a clerk in Kraft’s eyes, and communicating that was the point of Kraft’s performance.

Kraft was like the surly parent of a 15 year-old last night, dropping the, “not as long as you live in a house I pay for” bomb.

The Patriots might be guilty of manipulating the footballs prior to the AFC Championship Game against the Colts – or they might be innocent as they claim – but when you are Bob Kraft, you have become conditioned to setting the rules and level of discipline for breaking them.

Nobody puts Baby in a corner, and no $40-million per year bureaucrat weakened by the Ray Rice investigation is going to dictate terms to Kraft.

Yesterday’s Kraft press conference was a perfect example of big boy hard ball – a game an employee like Goodell is invited to lose by a man like Kraft.