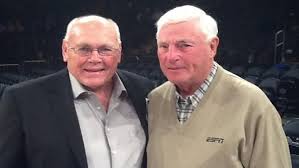 Gene Keady and Bob Knight are all smiles now, but through 41 games in the Purdue vs. Indiana rivalry, their relationship appeared to be magically contentious.

Knight vs. Keady was the State of Indiana’s version of Ali vs. Frazier, and fans loved it.

For 20 glorious seasons, those two coaching heavyweights appeared to hate each other and all their rival stood for.  It was glorious era of combative basketball and behavior from two historic programs and coaches.

They played 41 times from the beginning of Gene Keady’s reign in West Lafayette and Bob Knights zero-tolerance ouster with Purdue winning 21 times and Indiana claiming 20 victories.

Knight’s ire toward the Boilermakers brought a donkey on his TV show as a replacement for Purdue athletic director George King, threw a chair, and raised holy hell in a historic locker room rant captured on tape.

Keady saved his vitriol for practices, tumultuous explosions at officials, and for attendees of his basketball camps.  His face contorted in anger as he told child campers in 2000, “You don’t have to wear Purdue shirts all the time around here, but if you wear an Indiana shirt, that’s BULLSHIT!”

Indiana fans love to point to the five national championship banners in Assembly Hall, while Purdue fans extoll the virtues of leading the all-series 113-88.  Indiana fans counter that since the introduction of the NCAA Tournament in 1939, Indiana actually leads the series 78-63.  Purdue fans then start talking football, and Indiana fans order another beer after briefly mentioning the 2014 Old Oaken Bucket game.

Tonight, the two teams play a game with stakes higher than bragging rights for the first time since 2008 – Kelvin Sampson’s final game as Indiana coach, and the only time since Knight was fired that both teams were ranked prior to a game.

Purdue is unranked, but currently sport a 4-3 Big Ten record, while the Hoosiers have been the surprise of the college basketball season by being ranked #22 with a 5-2 Big Ten record.  Tonight’s winner will elevate its status in the eyes of the NCAA Tournament Selection Committee, and the loser will take a significant step toward the NIT.

Isaac Haas and A.J. Hammons bring size to the floor Indiana can’t match, but Indiana has figured out how to exploit an advantage in quickness an deadly shooting accuracy.  Basketball is like boxing – styles make fights, and the contrast in styles for tonight’s game make this game fascinating.

But when Indiana vs. Purdue play, it’s not about Octeus vs. Ferrell, Hammons vs. Hartman, and Blackmon vs. Stephens.  It’s about Knight and Keady with blow-by handshakes, sucker punches between Isiah Thomas and Roosevelt Barnes, shooting battles between Steve Alford and Troy Lewis, Butch Carter at the 1979 NIT final at Madison Square Garden, a donkey in a Purdue cap, and the thousands of arguments so predictable most of us could recite either side verbatim.

College basketball is better when both sides of great rivalries are relatively even – Louisville vs. Kentucky, Duke vs. North Carolina, Kansas vs. Missouri, and Purdue vs. Indiana.  Finally, the Boilers and Hoosiers have it right enough at the same time that fans see this as more than just another game.

And while no one wants a chair thrown, punches exchanged, or a donkey staring blankly at Chuck Marlowe, it would be great to see Indiana coach Tom Crean and Purdue’s Matt Painter staring each other down at midcoast like Crean and Nebraska’s Tim Miles did in this season’s Big Ten opener or never break stride or make eye contacts they share a very quick postgame handshake.

Keady and Knight never appeared to like each other, and we loved it.

I-65 and the Ruel W.Steele Memorial Highway connect these two schools.  Nothing is gained by either Purdue or Indiana taking the high road in or out of West Lafayette and Bloomington.

With the stakes this high, let’s see top end focus, a surly countenance, and at least a hint of downright unpleasantness tonight.

As we wait for tonight, here are some amusing videos and audio – by the way, the rant by Knight is unedited and features some extreme profanity.  The chair throwing shows the fouls that caused Knight’s outrage.  The donkey thing was extremely entertaining when I watched live as a freshman in Bloomington.