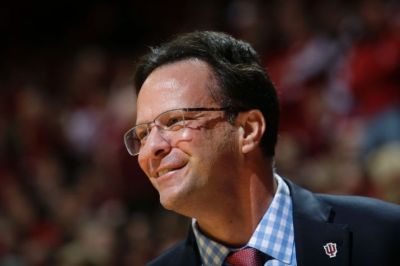 With last night’s loss at Assembly Hall, Tom Crean’s Hoosiers have now lost five of eight and his postgame comments were a lament of shots that didn’t fall.

Indiana lost a basketball game to Purdue last night at Assembly Hall that dropped them to 8-6 in the Big Ten – one-half game ahead of two teams tied for seventh.

The most troubling part of the night for Indiana fans should be the opening comment coach Tom Crean delivered in his postgame remarks, “We could have played a little better, but bottom line, a couple of those shots go down, it’s a different story for us.”

Strange assertion for a coach whose team just took a loss from a team that only hit 2-of-18 from beyond the arc.  He could easily have said, “Hell, if Purdue hits a few shots, we get run out of here by 20!”

Crean’s comment about shots not falling reminded me of former football coach Bill Lynch telling me before his final season as coach of the Hoosiers that his team’s previous season was only 12 positive plays from a Big Ten Championship.

Point guard Yogi Ferrell had a different view of what was missing on this night, “We’ve got to fight. Tonight we felt like we came to play. Played really well to an extent, but at the end of the day, our fight didn’t match theirs. I feel like playing Purdue and especially a big rivalry, we’ve got to go and match the intensity and just fight a little harder.”

There was nothing wrong with Ferrell’s fight last night as he scored 21 points on 15 shots and chipped in five boards and four assists.  In fact, Ferrell was one of only two Hoosiers with more than one rebound.

So often basketball games are not determined by the what and where, but the how – and how hard.  Fans didn’t need to know the difference between a 1-3-1 zone from a man-to-man to see that Purdue simply played with more fight and passion last night when both seasons were on the line.

The size advantage for Purdue was also a huge (literally) problem for Indiana as centers A.J. Hammond and Isaac Haas combined for 32 points, 14 boards, and four blocks (all Hammons) compared to 10 points (all Hanner Mosquera-Perea) two rebounds, and three blocks for Mosquera-Perea, Collin Hartman and Emmitt Holt.

But that wasn’t about size as much as it was toughness and desire.

With four games left for both of Indiana’s Big Ten teams, the Boilermakers and Hoosiers are headed in decisively divergent directions.  Both teams play Rutgers next – Indiana travels there Sunday afternoon, and Rutgers visits Mackey Arena next Thursday.  Both need a win to continue to be seen as a potential participant in the NCAA Tourney next month.

While the RPIs for both reflect their recent play (Indiana’s ranking dropped last night from 28th to 34th while Purdue bounced from #69 to #58) the BPI is a little better calibrated to measure current quality of play (Purdue passed IU as it jumped to #40 while IU dropped to #43).

What all of that means beyond being ranked higher is better, I don’t know.  Playing winning basketball requires teams to play hard and together, and Purdue has done that much more often than its opponents recently as they have vanquished seven of their last eight foes.  Indiana is 3-5 over that same span.

Last year’s shutout for Indiana teams in March Madness won’t be repeated this season, but it remains to be seen exactly which teams will join Notre Dame and Butler in the Big Dance.  Last night’s game brought a little additional clarity, but the final four games and the Big Ten Tournament will seal the deal one way or another for both the Boilers and Hoosiers.

All that’s certain is that wishing missed shots had dropped isn’t going to help Indiana beat Rutgers Sunday at 5:15p.  Invitations for teams like Indiana and Purdue will be reserved for the toughest teams who have a clear vision that 40 minutes of focus and fight need to define their effort because that is how you win basketball games.

And then the report card for Indiana, Purdue, and every other team in college basketball will be issued.  Last night was a quiz for both.  Only after the entire body of work is evaluated can an overall grade for the programs be known.