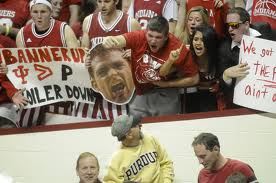 Assembly Hall will be rocking tonight, but fans will stay classy as always in Bloomington.

Indiana vs. Purdue used to be something else.  Streets in Indiana emptied.  Kids were allowed to stay up past bedtime.  Gene Keady and Bob Knight matched wits and wills.  Knight brought a donkey onto the set of his TV as a replacement for the Purdue AD, and Keady profanely threatened campers who might dare to wear an Indiana shirt during workouts.

From 1981-2000, Purdue won 21 and Indiana 20.  Both captured six Big Ten titles, and the state was divided down the middle by allegiance.

Knight was fired due to a misguided attempt by IU president Myles Brand to de-fang him, and Keady gracefully slipped into a forced retirement.  Both programs occasionally showed their previous pedigree.  Indiana went to the Final Four in 2002, and enjoyed some ill-gotten success in 2008 with Eric Gordon and a band of rogues.  Purdue roared back from 2008-2011 with a serious recruiting class that included Robbie Hummel, E’Twaun Moore, and JaJuan Johnson.

Indiana got hot with Cody Zeller, Victor Oladipo, and others in 2012 and 2013.  The sporadic swords of solid play never crossed until this season.

A.J. Hammons, Jon Octues, and Rapheal Davis have spearheaded a resurgence in West Lafayette, and the five-man backcourt of the Hoosiers are on the precipice of  a return to national prominence.

And so tonight for the first time in more than 20 years, both the Boilers and the Hoosiers have a tall stack of chips in front of them while sitting at the same table this late in the season.

If Matt Painter’s Purdue team can become the second to post a win in Bloomington this season (Eastern Washington was the first and only), they will run their conference record to 10-4, and virtually assure themselves of a ticket to the Big Dance.

Indiana is 8-5 right now, and in need of a couple of more wins to ensure a return after sitting quietly at Cook Hall while the cool kids got to party last March.

Because of losses to Vanderbilt, North Florida, and Gardner-Webb, Purdue may need as many as 12 Big Ten wins to earn the respect of the selection committee.  Never in the history of the expanded NCAA Tournament has a Big Ten team with 11 wins been ignored, but this year is a strange one.  With four games remaining after tonight – vs. Rutgers, @ Ohio State, @ Michigan State, and a season finale at Mackey against Illinois – needs to get busy to hit the magic number.

Conversely, Indiana beat nationally ranked teams like Butler and SMU in the preseason to craft a little breathing room, but not much.  The last four games for the Hoosiers are @ Rutgers, @ Northwestern, and at home against Iowa and Michigan State.  Rutgers might offer little resistance, but Northwestern has won two in a row as Chris Collins young team has figured out recently how to finish games a little bit better.  Iowa is a cornered animal right now, and Michigan State has won five of six.

The short version of that paragraph is that the Hoosiers have work to do, and it needs to start tonight.

Assembly Hall will be filled and loud as usual, but with the shared stakes this high, there will be a little extra tension in the building that saw so much contentiousness and greatness between these teams for so long.

Painter vs. Crean isn’t Keady vs. Knight – as least not yet, but the echoes of those 41 days and nights still so fresh in our memories will be awakened tonight at 7p as young men not yet born when this game mattered so much the last time square off and fight for 40 minutes.

To the winners go the spoils, and the spoils are serious this time around.

9 thoughts on “Indiana vs.Purdue – Tonight’s winner will earn a trip to the NCAA Tournament”