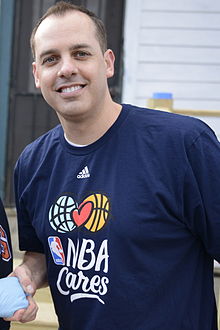 Only seven games from coaching more NBA games than anyone in Pacers history, Frank Vogel has learned that good and bad luck come in equal measure without credit nor apology.

Late in the afternoon yesterday, Indiana took the court against Rutgers University, and it was clear the Hoosiers would roll over the confused and apathetic Scarlett Knights.  The Pacers went to work as the Hoosiers game reached halftime against the team with the best record in the NBA – without the best shooter in the league, Stephen Curry.

Tom Crean’s Hoosiers sputtered for the first ten minutes, barely energetic enough to force a 16-16 tie before finally making the choice to vanquish this un-Big Ten worthy rabble from Jersey.  From that point forward, Indiana showed the qualities that allow some to compete in the Big Ten, while Rutgers again retreated to the cellar.

Rutgers is awful, and while Indiana isn’t great, they aren’t a muddled mess either.  Ninety minutes later, Indiana was packing for the flight home after a drama-free 84-54 win with a 9-6 conference record and a nearly bulletproof NCAA Tournament resume.

No apologies necessary.  What was Crean supposed to do, lend Rutgers coach Eddie Jordan Troy Williams to help level the competition?  Wins are wins, and while Indiana getting a chance to play Rutgers twice while only having class of the league Wisconsin once in Madison is a sweet scheduling quirk.

With that win, the Hoosiers are one win from their 20th overall and tenth in the Big Ten – both are theoretic benchmarks in earning a trip to the Big Dance.  That’s a nice accomplishment for a team that sat home last March after a confused first round washout in the Big Ten Tournament.

The Pacers are playing better basketball since the return of George Hill to the lineup, and when Golden State visited, even ardent fans hoped for the best but feared the worst.  Stephen Curry was held out of the lineup with an ankle issue, and that was all the Pacers needed to find a way to eke out a win over the previously 43-9 Warriors.

Paul George has been out of the Pacers lineup for the entire season, so any pity for the health of the Warriors best player was not forthcoming.  Not a single Pacers opponent has offered to help the Pacers out of their hole, so why should the Pacers apologize for playing better than the best without their star.

After being a decrepit 17-32 at the end of January, the Pacers have won six-of-seven and are now 1/2 game behind the eighth place Brooklyn Nets and one game in back of the seventh place Miami Heat in the Eastern Conference playoff race.

The Pacers aren’t apologizing, and no one in the NBA is offering any pity – as it should be.

And don’t look now, but George is less than a week from being healthy enough to practice, according to his own timetable.  If by late March, George is able to give the Pacers 18-20 minutes per game, how good could this team be?  Better than they have been while winning the last six-of-seven without George is a reasonable expectation.

The top seed in the East is likely to be the Atlanta Hawks – a team whose season the Pacers have ended during the past two postseasons.  Think the Hawks are a lock to get over the hump this year just as the Pacers get healthy?

As for the Hoosiers, 9-6, even in a depleted Big Ten, is no joke.  The last three games of the regular season at Northwestern, vs. Iowa, and vs. Michigan State is a tough gauntlet to run.  All are winnable, and all are, well, not winnable.  Regardless, no one is going to cry for Indiana because the schedule brings them Northwestern, Iowa, and Michigan State right at the moment they found themselves anymore than they celebrated because of a win at Rutgers.

Even 70% through the season, there is no telling whether either the Pacers or Hoosiers will ultimately be as good as fans hope or as bad as they fear, but neither deserves nor should offer an apology.