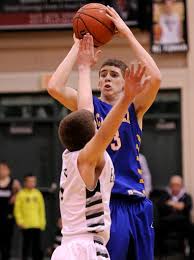 Ryan Cline will miss shots now and then, but it will always surprise you.  A chance to lead – he never misses those.

Good enough for me.

I don’t know all the candidates for Mr. Basketball, the most coveted individual prize in Indiana high school basketball, but I’ve seen a lot of Carmel High School’s Ryan Cline and spoken to him at reasonable length.

He is the best high school shooter I’ve ever seen.  He’s among the best leaders.  And all he does is win, which is what he’s going to try to do tomorrow at Noon against McCutcheon in the Marion Regional.

Cline doesn’t just make shots – his release and arc are relentlessly precise.  His confidence never wavers, and the results are remarkable, regardless of the situation.

Late in close games, and Carmel played a lot of close games this season, Cline takes the ball and provides the difference for the Greyhounds.

Carmel played in 13 games decided by 10 or fewer points this season, and won 11.  Four games either went to overtime or were decided by a single point, and Carmel won all four.  There are two ways to win those games, make shots under pressure, and cause the opponent to miss.

There is an undeniable feeling when Cline has the ball that every shot he takes will slice through the net.  People in the stands feel it, and so do opponents.  They do everything possible to keep the ball out of Cline’s hands, but can’t.  And when he gets a touch, he’s tough to keep from getting a clean look – a clean look is all he needs.

As good a shooter as Cline is, the response from teammates to his leadership might be even more important to Carmel’s success.  Late in games, Cline holds teammates accountable and they respond.

Talking to Cline, he’s confident, relaxed, and modest.  His features are relaxed, and the conversation is easy.  On the court, his face hardens into a controlled focus that borders on anger but never crosses a line.  There is no question for every second of a 32 minute game that Cline’s spirit is entirely devoted to the challenge of winning – not shooting, scoring, padding stats, laughing, relaxing, or taking a possession off.  All efforts are driven by what appears to be an unquotable desire to wring the potential greatness from each possession.

Over Cline’s four years playing for Carmel, the Greyhounds are 91-10 with two state championships and a chance at a third.  Winning is what this kid does, and when he reports to Purdue this summer he is going to bring more than a jump shot to West Lafayette.

If there is a high school basketball player more deserving of Mr. Basketball in Indiana, and there could be because I haven’t met them all, he must be spectacular in every way.