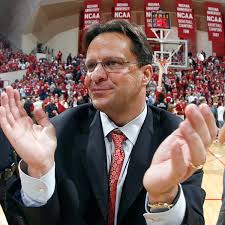 The time has come for Indiana University to thank Tom Crean for his seven years of hard work in returning a sense of self-respect to the basketball program.

Indiana Basketball needs a leader that will define its culture and bring hope for success each season, and Tom Crean is not it.

It’s not that Crean isn’t a good person, or an ineffective representative of Indiana University.  There are many good things about Crean, traits you would seek in a coach that can lead an athletic program.  Players get grades and degrees.  They work hard too.  Check and check.

Two weeks ago, I wrote a post about the metrics Indiana University should use to evaluate the position of head basketball coach at Indiana.  Here is how Crean stacks up:

Which of those first six would you rather have than Crean?  Ryan?  Of course.  Izzo?  Without hesitation I would make that swap.  Matta?  Not a big fan, but based on results, that’s a no-brainer.  Painter seems a better fit at Purdue, but the Hoosiers could use their own version of Painter.  Beilein is a hell of a coach.  Turgeon is the one guy I would pass on in favor of Crean.

Crean didn’t rank among the top 50 in college hoops by a panel of ESPN experts a year ago.  Would he move up because of a 20-14 overall record, 9-9 in the Big Ten, and a first round bow out in the NCAA Tourney as the first double digit seed in IU history?

Indiana defenders closed out with their hands down, were beaten to the rim in transition, and appeared baffled by their own efforts at playing zone.  There were countless possessions where two IU players were in zone while the other three were in man-to-man.  There is no doubt Crean knows a lot about basketball, but somehow the lessons were lost in translation to the players – and thus to the fans.

Here, Crean scores.  The APR at Indiana has been perfect for years, and most players graduate in three years.  During a time when the only compensation for the works that brings in millions of dollars to the NCAA, conferences, schools, and athletic departments is an education, that needs to be a priority.  At Indiana under Crean it has been.

Let’s give Crean a pass for his first two years in Bloomington as the program was rebuilt following the Sampson scandal.  The following five found Indiana atop the Big Ten regular season standings once – a season that ended with a loss in the Sweet 16 to Syracuse.  In those five seasons, IU’s Big Ten record is 44-46.

Whether you like or loathe Crean, and I like him, 44-46 tells the story of a program mired in mediocrity.

Without taking into account the arrests and suspensions that caused many to question Crean’s ability to bring discipline into the lives of those he leads, Indiana’s path forward needs a fresh approach by a leader who can rally and unite the Indiana fan base.  Add the arrests and galling recent admissions of low expectations, and the course is crystal clear.

All 13 scholarship players are scheduled to return, and at least two recruits are coming to Bloomington.  That means two current players will be “Creaned”.  Yes, the practice of oversigning and bouncing players currently on scholarship is actually named for Tom Crean.  That’s not a good thing.

Back to those low expectations for a second.  Here is what Crean said following the Hoosiers loss Friday, “They have persevered through adversity, persevered through different trials, and they did some things that not a whole lot of people expected them to do. Unofficially picked 11th in the league and they get into the NCAA Tournament with a 10th seed as the youngest team.”

That is a nauseatingly self-congratulatory appraisal of a mediocre season, and if there was any doubt Crean needed to go before Friday, it evaporated after hearing that.  If Crean doesn’t hold himself accountable for failure, how can he claim to lead young men toward maturity?

Whether athletic director Fred Glass wants to wait until July 1 to save $5-million on the buyout, that’s up to him, but Crean returning for another season is likely to cause an unpleasant situation to turn downright ugly.  The death spiral has started, and nothing can stop it.

Recruiting will be adversely affected as all coaches recruiting against Indiana will tell recruits that Crean is soon to be gone.  Once that happens, future success is impossible – unless success is defined as finishing tied for seventh when picked to finish 11th.

Claiming victory after a season that ended by losing 10 of its final 15 games is weak, and Indiana Basketball deserves better than weak.

39 thoughts on “Indiana Basketball – Time for Indiana to move forward, say thanks and goodbye to Tom Crean”