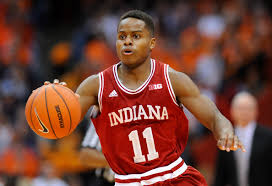 Hard to imagine Yogi Ferrell will announce anything but the patently obvious decision to stay at Indiana for his senior season at Ruth’s Chris Steak House a week from Saturday.

Does anyone really think that Indiana point guard Yogi Ferrell is going to forego his senior season to enter the NBA Draft?  For those awaiting word, it will come at Ruth’s Chris Steakhouse on the north side of Indianapolis Saturday, April 25th.

I have yet to find a mock draft or word from an NBA executive that provides any substantial evidence that Ferrell would be taken inside the top 40 of the June draft, and while being a first rounder is not the point of demarkation it used to be because so many teams are giving second rounders guaranteed money, outside the top 40-to-undrafted is an assessment that would seem to remove all doubt as to what Ferrell will decide.

Here are the current projections of Ferrell’s draft status, according to the most reliable mock drafts (if there could ever be such a thing):

So what is the need for this formal announcement?

I’m not going to wrestle Kate Upton from her horse, talk her out of her armor, and marry her, but I’m not going to invite people to an event to announce at the Nickel Plate Restaurant in Fishers that I am opting out of a romantic liaison I have no chance of participating in.

My nephew is going to the University of Iowa in the Fall, but he saw no need to sit at a table with a bunch of hats to announce his decision despite it being just as big a deal for our family as the decision of a highly touted recruit selecting his school is for his or her’s.

Certainly, Ferrell has a better chance of playing in the NBA than I have to spend any time with Upton (outside of my brief run in with her at the Super Bowl in Indianapolis when she sneered at me for already being in an elevator she wanted to occupy alone with her security team), but there seems to be no chance that he is going to get the affirmation needed to believe he will be drafted by an NBA team.

Where NBA people currently see him is not what most need to hear in order to pull the trigger on prematurely beginning an NBA career, and with a fourth year as the unquestioned leader of the Hoosiers, there is a chance to make a jump forward for the 2016 draft.

This wild over-estimation of the importance of decisions made by a young man and his family is driven by a couple of factors.  The media is guilty for paying rapt attention to where a teenager decides to go to college – an almost entirely meaningless moment for all but the family of the kid. Families who build their lives around the schedule of a child-athlete and treat every game as a monumental event are just as nuts/guilty of inflating a kid’s self-image beyond all reason.

The unholy confluence of these dynamics causes the existence of the type of event Ferrell and his family will hold a week from Saturday.

Even if the rationale for holding the event is to raise money for a foundation devoted to providing opportunities for young athletes of all abilities, its purpose reflects our strange preoccupation with decisions made by athletes, and reflects a self-immersion that operates outside the parameters of logic and reason.

If Ferrell was truly on the fence as to whether he would return to IU, news regarding the decision would be interesting to IU fans, and to me too.  Without Ferrell as a point guard, Indiana would be in trouble for 2015-2016.  Regardless of the illogic of doing so, fans care beyond all reason, and I’m guilty of that too.

When Cody Zeller sat in the gym at Washington High School to announce whether he would attend North Carolina, Butler, or IU, I worked hard to find out what the decision was beforehand.  My interest wasn’t simply a mercenary effort to scoop others.  It was because my curiosity was beyond manic.  I wanted badly to know where the hell a teenager wanted to spend a couple of years in college.  Silly.

This is different because if the NBA experts to whom I’ve spoken and heard from in the media are to be believed, it makes no sense for Ferrell to leave Indiana.  My curiosity is sated.

There is no news here because the answer is already obvious.

The only news would be an explanation as to why the event exists at all – other than to get a great steak.

10 thoughts on “Indiana Basketball – Why is Yogi Ferrell turning announcement to return into major production?”