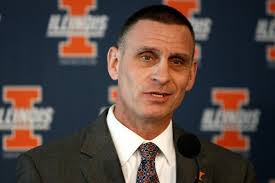 Illini AD Mike Thomas has a problem – or several problems – that may force him to make some changes.

Illinois serves as a wonderful counterpoint to Indiana in so many ways.  For the last two days, I spent a considerable amount of time talking on the radio (3p-6p on CBS Sports 1430) about IU basketball player Devin Davis being cited for weed possession.  Then I start reading about the University of Illinois Football program, and I feel so much better about IU.

That’s Illinois.  Hoosiers feel like financial fools until they look at the books of the state to our west.  Then we feel like geniuses.  Some people in Illinois mock Indiana, but other than an overall lack of driving ability and girthy residents, the barbs about Indiana are  vapid and ill-founded.

The University of Illinois football team and its coach appear to be at odds over the treatment of players.  According to players who are speaking up, coach Tim Beckman physically attacks players and forces them to play while injured.

There are similar accusations being made against the women’s basketball coach as well, so this issue isn’t limited to one rogue program.  It may just be a department wide matter for which AD Mike Thomas is responsible..

It appears the students at Illinois are being treated less humanely than the hogs in Delaware County, Indiana, that will no longer be subjected to wrestling area teens at the county fair.

And now, the National College Players Association is jumping to the defense of those who are blowing whistles more loudly than Beckman during spring practice.

Ramogi Huma is the head of the NCPA, and he sent a letter Tuesday to University of Illinois Chancellor Phyllis Wise calling for the dismissal of all university officials who have abused players.

You remember Huma if you followed his efforts to help unionize Northwestern football players a couple of years ago.

The evidence to this point is purely here-say, and Huma prefaces his demand by saying that terminations should only take place as credible evidence is uncovered.

And then he requests a reply.  Bold words for the leader of an ad hoc organization that serves as an unofficial representatives of athletes that may never have heard of the NCPA or Huma, but someone needs to speak on behalf of the athletes.  Why not Huma?

The point is that Illinois is in trouble, and because the issues extend beyond football and Beckman.  Illinois’ football program hasn’t been a source of great pride for the Land of Lincoln for a generation, but Beckman seems to have them moving in the right direction – at least from a wins and losses perspective.

Beckman’s Fighting Illini teams have won two, four, and six games over his seasons as coach, but winning is only part of the formula for success in college football.  Gone are the days of the Junction Boys of Texas A&M when a punishing 10-day camp led to hospitalization of some and winning by others.

Whipping a team into shape and bludgeoning them into compliance is correctly cause for dismissal in these slightly more enlightened times.  Ignoring injury, and asking a player to do the same, is banned in the NFL.  It isn’t allowed in the there, and it shouldn’t be tolerated in colleges where players are not paid at all.

The problem is that athletic directors like Thomas aren’t applauded or incentivized for serving as an ambassador for student-athletes – they hire successful coaches and back them up so they don’t look like morons for having hired them in the first place.

Maybe there’s a place at the table for a guy like Huma after all to represent unpaid athletes serving only at the pleasure of well-paid coaches.  If not him, then who?

As for those of us in Indiana, there exists yet another reason to feel good about our state and its universities.