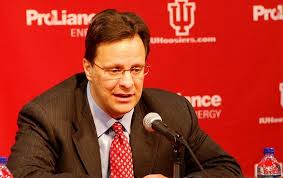 The answer to Tom Crean’s question, “What can I do to keep these kids from screwing up?’ is to try something else.

Tom Crean is employed by Indiana University to execute a number of tasks, but they each fit under the umbrella of the running most visible and powerful marketing initiative IU has available to attract attention and students.

Each player and coach of Indiana’s basketball team is a high profile representative of the university.  They are not simply students and coaches; their portrayal of the culture of the university is the most important connect point for alumni, boosters, staff, and Indiana residents whose tax dollars support the school.

When IU wins, the school shines in a very positive light.  When it loses, well, it isn’t so positive, and people like my nephew (who loved IU in 2013 as the Hoosiers won the Big Ten) decides to attend Iowa instead.

But it isn’t all about winning and losing, especially when the losses start to pile up as they have over the past two seasons when Indiana has posted a mediocre-to-be-kind 16-22 record in conference play.  it’s also about behavior.

Devin Davis being cited for possession of under 30 grams of marijuana Monday was the latest in a long line of college hijinks that have cast the Indiana program under Tom Crean as a runaway train of adolescent buffoonery that undermines the image Indiana University tries to project.

College students everywhere get stoned, drive drunk, and get popped for trying to use fake IDs to gain entry to a bar near campus.  No amount of great parenting, warnings, and threats of dire consequences are going to keep a knucklehead from acting like a knucklehead.  There will be mistakes.  College is where many go to learn that idiocy has a cost.

In this case, it may just cost Tom Crean his job.  If players want Crean gone, I’m not sure there is a better way than to continue to pulse petty arrests and citations for drug possession that make him appear weaker and weaker as a leader.

These aren’t ordinary students who play basketball at Indiana.  Basketball players are the embodiment of all that is supposed to be good and decent about a school in need of some positive public relations, and when they screw up, people notice and pay attention.

For that reason, whoever is sitting in the basketball coach’s office in Cook Hall needs to assemble a team of 13 great kids who can play basketball at a championship level.  That’s not an easy task.  Just getting the athletes necessary to win is tough – add the behavioral component, and the talent pool diminishes.

And then the job is to teach the kids to play championship basketball as well as keep them in behavioral lanes that bring credit to the school.  That’s not necessary at all schools, but at Indiana, a university with a flagging football program that is by and large meaningless as a touchpoint to alumni, boosters, students, and staff, it is a must.

One of the reasons great basketball players attend Indiana is their desire to be a star – a guy 17,000+ cheer for in Assembly Hall as they follow in the footsteps of other great players like Schlundt, May, Buckner, Thomas, Alford, Cheaney, Jeffries, and Oladipo.  Being a star comes with responsibilities that don’t exist for rank and file students.  One of those is not to be an idiot.

The current Indiana Basketball roster is seemingly filled with idiots who are either being led toward moronic activities or not being adequately dissuaded from them.

Stanford Robinson decided to transfer, but not before an arrest and suspension.  Troy Williams was suspended for a series of positive drug tests.  Yogi Ferrell – arrested.  Hanner Mosquiera-Perea arrested for a DUI on the day before a game.  Emmis Holt arrested for driving after drinking which resulted in Devin Davis falling from the hood of an SUV and fracturing his skull.  That’s in the last 15 months.

Tom Crean and all those who preceded him or will follow him aren’t just basketball coaches.  They are managers of the most powerful marketing arm of a major university, and IU Basketball needs to perform on and off the court in a manner fitting the mission statement of the university.

Fair or not, the behavior of the players as university ambassadors is Crean’s responsibility every minute of every day they are on campus.  For the past two years, many of the players he invited to Bloomington have not done him or IU proud.  For that, he should be held accountable.

If the players want Crean fired, they are doing a hell of a good job of trying to get that done.

4 thoughts on “Indiana Basketball – Are misbehaving players trying to get Tom Crean fired?”