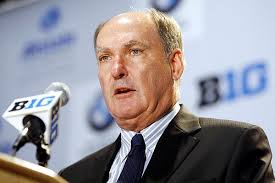 Jim Delany either has lost his grip on reality, or he has a hell of a sense of humor.

Big Ten commissioner Jim Delany was either being very silly or very funny as he proposed the re-enactment of freshmen ineligibility for men’s basketball and football players.

College basketball and football at the major conference level aren’t simply minor league developmental portals for the NBA and NFL; they are revenue generators and marketing arms of the universities they represent.

A “year of readiness” as Delany called it last April does not fit as a component of those realities, so not only was it never going to be seriously considered, any discussion the concept of freshmen ineligibility in those two sports would be flawed and wasted because it would deny the real purpose of those sports.

You want to reform college basketball and football, start by rolling back the outrageous pay scale for the coaches and administrators.  Tell CBS and ESPN to keep their cash.  Eliminate athletic scholarships.  Turn sports at the collegiate level into an intramural level exploit designed to enhance the educational experience, not market the university and raise money via endowments and donations.

Yeah, none of that has a chance to happen either.  The inertia driving the financial expansion of college basketball and football is way to strong to fight at any level, but certainly not with yipping and yapping about a “year of readiness”.

Freshman ineligibility is to the corrupt ideals of college basketball and football as car size is to traffic.  Worse is that we have now spent a year discussing how the hell the concept of freshmen ineligibility makes any sense, as though somehow we are intellectual inferiors to Delany.  We erroneously believe that because Delany is a smart guy, our inability to understand how freshmen ineligibility might launch a logical discussion of college sports in born of our own ignorance.

That’s the cruel canard of academics.  Delany’s supposed intellectual superiorities turn us batty as we try to solve the riddle of the Sphinx.  “Delany must mean…,” is how every conversation about the construct of college athletics has started for the past 13 months.

Sadly, all that effort was wasted because it never made any sense at all.  Either Delany thinks he’s a lot smarter than he is, we think he’s a lot smarter than he is, both, or he was just jacking with us to amuse himself.  If it’s the latter, he is the king – the chief potentate – the grand poobah of practical jokers, and I need to get to know him better.  He and I would get along great.

To release a 12-page paper that launched an idiotic and pointless debate that ignores the critical errors inherent with the current state of big money college athletics is a helluva good joke.

It’s not quite as good a joke as Delany’s silly “Leaders” and “Legends” divisions of Big Ten football that was finally abandoned when Rutgers and Maryland joined the conference last year, but is still very funny.

It doesn’t help kids or their universities take more seriously the academic missions upon which the schools missions were formed, but given the sheer volume of cash at stake, nothing would.

All the consternation and posturing administrators can muster isn’t going to change the direction of college sports toward a more even balance between academics and athletics.  When networks champ at the bit to air young men taking a geology exam, maybe there is a chance, but that is not likely to happen any time soon.