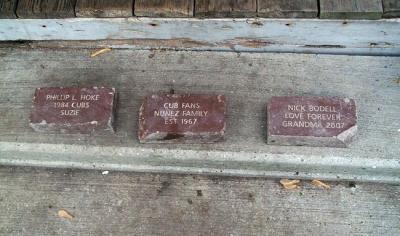 When this picture of commemorative bricks showed up in a downstate newspaper, Cubs fans felt cheated and disrespected – and rightly so – by a callous and foolish business wing of the franchise.

Can the business wing of the Chicago Cubs do anything right?

When Cubs fans bought inscribed bricks that would “forever” surround Wrigley Field with messages of love and memories, they believed the bricks would be there for generations.

They lasted less than 10 years, and the communication from the team to those who purchased the bricks has been filled with duplicitous rantings from a team whose business office has been – at the minimum – disrespectful to fans.

Bricks that for many represent a memorial marker for a loved one, were dumped in a landfill 100 miles south of Wrigley, rather than being moved from one area to another as was indicated in a comminication from the Cubs to accommodate the renovation of the 101-year old ballpark required their removal.

The bricks are popping up all over Pontiac, Illinois, the town where the landfill is located.

The Cubs told buyers of the bricks earlier in the year, including my Mother, that they would be moved to a new location, implying they would be taken from a previous location and then placed somewhere else on the plaza near the park.

The Chicago Tribune, the owners of the team when the program was launched, also reported that a replica brick was provided to those who bought them.  If that’s true, my Mom is still waiting for her’s with my late Dad’s name on it.

Sadly, this isn’t the first time the business office of the Cubs has shown a pathetic level of indifference to the feelings of those affected by progress.  In 2013, the Cubs tossed into a Wrigley Field dumpster a giant card signed by fans expressing their love for Hall of Fame third baseman and longtime broadcaster Ron Santo, and last year an uneaten cake celebrating the 100th anniversary of Wrigley Field was thrown in the trash.

But this brick purge is the greatest insult to fans like my Mom, who bought a “permanent” remembrance for a family member or friend whose love for the Cubs helped define them.  To think of those bricks, literal touchstones, being heartlessly churned by a backhoe, crushed, and tossed in a dump truck destined for a landfill in downstate Illinois stirs strong emotions.  It is a personal insult that cannot be undone.

That the Cubs didn’t anticipate the strong response from the distressed owners that has answered their unfeeling and expedient  march through memories toward profits speaks volumes about the leadership of that wing of the ball club.

Baseball is about poetry, not spreadsheets.

It’s a warm summer afternoon walking hand-in-hand with an excited father through a tunnel, up steps, and into the seating area of a ball park so impossibly immersed in deep aqua blue skies and green grass, vines, and the scoreboard that it defines beauty in the minds of every generation of Cubs fan.

It’s Santo clicking his heels, a smiling Ernie Banks flipping his wrists to hit 512 home runs, vapor coming off an Andre Dawson throw to third to retire a runner bold enough to test his great arm, the grace and constancy of Ryne Sandberg at second base, Gabby Hartnett’s “Homer in the Gloamin'”, Dave Kingman running in from the clubhouse down the left field line to hit a pinch home run, and the dance a Greg Maddux cutter did on it’s way around a hitter’s bat before finding Joe Girardi’s mitt.

It’s about the unique memories of afternoons spent with long gone but fondly remembered loved ones.  The 12,000 bricks now in Pontiac gift shops and still in the landfill represent those memories, and the Cubs showed exactly how little they value them by treating the bricks like hunks of hardened clay that stood in the way of progress instead of who they represent in the minds of fans.

A businessman like Tom Ricketts can buy the Cubs, but not a fan’s love for the team or those treasured memories represented by names carved into a brick.  He can employ a heartless doofus like Crane Kenney, who has overseen countless acts of indifference, stupidity, and deceit during his unending tenure running the business end of the franchise, but he can’t corrupt that endless blue sky, green grass, and joy of seeing my Dad catch a foul ball.

That’s mine.  It’s not for sale.  There will be other owners of the Cubs, but I had only one Dad.