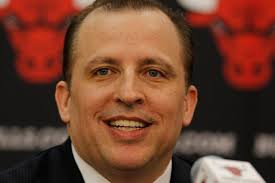 Bulls coach Tom Thibodeau wasn’t smiling yesterday, but he will again as he moves beyond the misery of rejection and toward another position of challenge.

Coaches and media members get fired with frighteningly similar frequency in today’s world, and this week I heard discussions about the methodology of both in private conversations.

Tom Thibodeau was canned as the head coach of the Chicago Bulls yesterday, and there was rampant criticism of the Bulls security staff following Thibs around as he gathered some personal belongings before finally leaving the facility.

It seems heartless to escort a guy, who until moments before was a well-respected employee, through a building in which he enjoyed unfettered access.  Hell, it is heartless, but it’s also sadly common.

The two desired outcomes for the company telling an employee he or she is no longer welcome is that there is no lawsuit nor ugly incident on the way out of the building.  With Thibodeau, who is scheduled to be paid $9-million over the next two years, neither was likely, and he certainly wasn’t likely to cop a couple of staplers on the way out, so the security convoy was more likely a self-indulgent expression of superiority by an executive who Thibs offended at some point – or a mandate by human resources so all protocols are followed to the letter for all terminations.

As for the media firings, those are a different issue.  I can tell you from experience that the human resources department dictates policy to the managerial team, and that the department head can have very little say over the process or the verbiage used during the dismissal.  Blaming the manager for the process or its execution is wrong.

That said, treating the moment a person a fired as a purely a legal proceeding fraught with potential liability is heartless, gutless, and miserable.  It’s unfortunate that lawyers get between two people at a moment like that, but the manager can’t be rightfully held accountable for that construct.  It’s not the manager who sits in the corporate meetings to decide how a person is told to vacate the premises.  It’s the faceless bureaucrats with fancy degrees and zero contact with those whose life path is inexorably changed by the moment of dismissal who craft termination policies.

Moms and dads lose their ability to contribute to a college education for a child whose life is also forever changed.  Houses are lost.  Full stomachs go empty.  A certain future becomes unpredictable from day to day.

Getting fired is a miserable experience – even under the best of circumstances – and if hating the manager makes it a little easier, go ahead.  But for every person fired, there are probably a half dozen employees that same manager has pounded a table and raised his voice to defend.  Maybe it’s happened for the same person who was finally fired because there was no other choice.

I’m not saying there aren’t heartless bastards out there who fire people without thinking twice about the consequences for the displaced employees and their families, but unless you have been in a meeting to gauge the heart of the person running the department, judging might not be the most righteous play.

The best response when fired is to continue working at what you love – whatever that is.  Rancor is energy wasted.  Move forward.  Understand your anger is an emotion that must be welcomed as part of the process and then discarded in favor of a more productive and positive focus.  In the right hands, mind, and heart, being fired can be a release toward a better life and career.

Answer adversity with an open heart and mind.  Forgive your tormenter because managers are only doing the best they can so they can keep their jobs.  If you feel shame, remember that in 100 years, no one will be alive to remember who the hell you were, much less that you were fired one day in 2015 by another person who goes unremembered too.