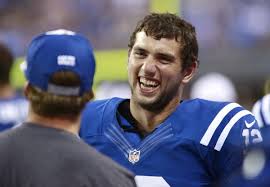 Andrew Luck may have more reasons to smile than anyone else in the NFL during the 2015 season.

The Indianapolis Colts are in a position where a championship could be in their immediate future.  Here are the top ten reasons the Colts are becoming the favorites to win Super Bowl L:

10 – Membership in AFC South – This division of leftovers has been the Colts to dominate since it was founded in 2002.  Tennessee, Jacksonville, and Houston have taken turns being decent, but the Colts have won nine of 13 division crowns.  Houston was 9-7 last year and Tennessee drafted Marcus Mariota, but the Colts are still the best of the worst division in the NFL.

9 – Schedule matches AFC South with NFC South – The gods smiled on the Colts this season as the NFL South is the division the Colts will play in 2015.  No team in the NFC South finished with a winning record in 2014, and none looks to have improved markedly through their offseason acquisitions.  Tampa Bay, Atlanta, Carolina, and New Orleans might be better in 2015, but on paper there is no division the Colts would rather play (other than its own) than the NFC South.

8 – Andrew Luck is entering prime – It feels like Luck has been the quarterback for the Colts for longer than three years.  It usually takes five years for a quarterback to reach his prime era of productivity, but Luck led the NFL in touchdowns last season, so I think he is ready to explode into his statistical prime a little early.

6 – Tom Brady suspended – There is no guarantee that the Patriots will be less successful minus Brady for the first four games of the 2015 season, but it’s damn unlikely they will be any better because Jimmy Garopolo will be under center.  (This is contingent on NFL commissioner having the stones to uphold his own suspension of Brady.)

5 – Phillip Dorsett – This guy is fast – really fast.  Dorsett is a game breaker, a potentially elite player as part of the offense and special teams.  Is he Devin Hester?  There has only been one Hester in the history of the NFL, but he’s lightning fast.  The Colts had a decision – draft the best of the remaining mediocre defensive linemen, or bring in a player already in a position of strength who might be able to change games with his speed.  They chose speed.

4 – Attracting AARP eligible free agents – Frank Gore and Andre Johnson will one day be enshrined as Pro Football Hall of Famers being the likeness of their previous teams, but that doesn’t mean the Colts can’t wring the last little bit of football out of them.  Johnson gives the Colts a rangy veteran, and Gore a blue collar running back who is a pro’s pro.  Both have a history of health and productivity that allows the Colts to count on them in ways impossible with Ahmad Bradshaw and Reggie Wayne – the players they are replacing.

3 – Consistent excellence from specialists – Kicker Adam Vinatieri, punter Pat McAfee, and long-snapper Matt Overton are as good as it gets in their disciplines.  Other teams scour the countryside for this level of skill in their special teamers, but the Colts have been smart enough to hang on to what they have.

2 – Return of Robert Mathis – Okay, this is a bit of a longshot.  Thirty-four year olds rarely return from an Achilles tear at the same level they enjoyed prior to the injury, but if this fumble forcing machine can be 80% of what he was in 2013, the Colts are going to be able to put pressure on opposing quarterbacks in a way this will provide an immediate competitive advantage.

1 – Previously unmentioned weaponry – Coby Fleener, Dwayne Allen, Donte Moncrief, T.Y. Hilton, Vick Ballard, and Duron Carter will have opportunities to shine, and all are capable of big plays.  The Colts might wind up assaulting NFL records for offensive firepower as long as most stay healthy.  This is an amazing group of skill players.