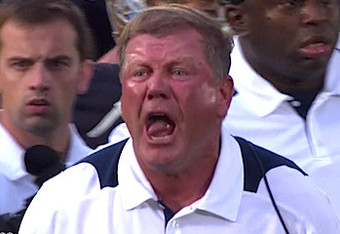 College coaches might care about your son or daughter, but they only turn this shade of red because they hate losing.

College coaches are paid to win.  That’s where their priorities begin and end.  Just win, baby!

Yes, coaches are also held accountable for metrics like graduation rates, NCAA compliance, and Academic Progress Rate, but the primary responsibility is to recruit, train, and motivate athletes to win.  Minus winning, jobs are lost, and when a coach gets fired for losing, it’s damn tough to get hired again.

Those who skirt NCAA rules, treat athletes shabbily, fail to instill systems that lead to athletes earning degrees – they can all get work.  Lose, and you are out.

That is why parents need to be constantly vigilant in overseeing the progress made by their children as they enter college, become immersed in that culture, and move forward toward adulthood.

Coaches are nothing like surrogate parents.  “Oh, we’ll make sure (insert athlete’s name here) goes to class and takes care of that side of the college experience.  Your son (or daughter) is going to get a great degree that will propel them to a level of success impossible to reach otherwise,” the coach will tell you during the recruiting process.

Then the letter of intent is signed, and the kid becomes the property of the school, program, and coach, and if you think the coach is somehow more interested in the well-being of the athletes than his or her ability to continue to remain employed, you are living in a dream world.

There is a ton of good that can come from participating in collegiate athletics.  There is very little free time, which is fantastic.  Athletes are required to attend study tables and have access to tutors – also a big deal.  They are exposed to a level of adversity that is duplicated in the business world, so they ease into that realm very easily.  At many schools, dietitians make sure the athletes eat correctly.

Socially, athletes have a coterie of friends with whom they train, study, and travel often.  They are required to attend classes the summer prior to their freshman year, so by the time the other incoming freshmen show up, they are very comfortable on campus.

That only scratches the surface of the positives, but parents need to be aware that in many programs the motivational tactics of coaches can severely test the boundary that separates inducement and abuse.  Parents need to communicate regularly with athletes to make sure those lines are not crossed.

Sadly, the relationship of coach and athlete is much more like that of a department head and employee than mentor and student. Managers are held accountable for the bottom line, and lose their jobs if goals are not met.  That’s how college sports works too.

Parents should feel very good about the opportunity made available to teens by participating in college sports, but also understand that the promises of a coach during the recruiting process are designed to close the deal, not reflect the reality of the upcoming experience.

I remember watching Bob Knight with his arm around Damon Bailey long after a game at Assembly Hall when Bailey was still playing for Bedford North Lawrence High School.  He looked like such a kind and doting father.

Thirty minutes prior to that touching moment, Knight let fly a string of obscenities so foul to Todd Jadlow – one of his players – that I am too embarrassed to repeat them.  He did it in front of a famous teen dying of AIDS, parents, and even U.S. Senator Richard Lugar.   It was appalling, and if I had been Jadlow’s Dad, I would have gone over the bench to hold Knight accountable for his ill-tempered and demeaning rant.

Remember that regardless of the sales pitch, your child is being recruited to help an athletic program win, and that the coach making the promises will not fill a role that resembles a parent for your child.  A parent loves his or her child.  A coach is paid by a university to elevate the prestige of a school by winning.

Don’t allow a coach’s word to foster a belief that those lines will ever be blurred.

Many coaches care, but not like a parent.  Stay involved to make sure the best interest of your child is represented.  Accept that the coach worries about winning and losing above all else.  Loving is your job.