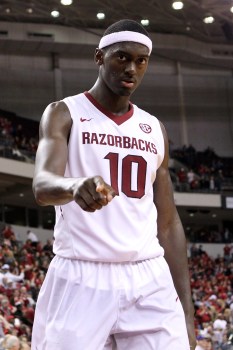 Bobby Portis will show up ready to work because he already learned why it’s important.

Some guys just reek of success.  They have usually faced adversity, received an honest appraisal, and responded with diligence on their way to success.  Hello, Bobby Portis.

Just over three years ago, according an interview I did with Portis, he played three minutes in his high school’s state championship game.  Upset, he asked his mom why he didn’t play more.  Mom came with the truth, and it changed Portis forever.  She said that the hardest working and most confident (funny how those two so often go together) players play the most.

Ports decided after that conversation that he would be both of those things.

Now, he is projected to be selected at the back end of the lottery during tonight’s NBA Draft.  He averaged over 17 points and nearly nine rebounds per game as the Southeastern Conference’s player of the year for Arkansas.  You thought maybe a member of the almost undefeated Kentucky Wildcats was the SEC player of the year?  No, it was Portis.

And how did that happen?  Mom told the truth, and instead of moping around, Portis started a regimen of work that led him to this rarified air.

So here is a 6’11” basketball player with great measurables who has already learned through experience that hard work yields a positive result.  Most people never learn that lesson, but Portis has it banked like a midrange jumper off the glass.

Given the unknowns and guesswork that are such a huge part of making the decision to pull the trigger during the draft on a near-child in whom you are going to stake your career and millions of your owner’s money, I bet on the kid who has learned the toughest lesson – that hard work is its own reward.

I want Bobby Portis to be a Pacer.