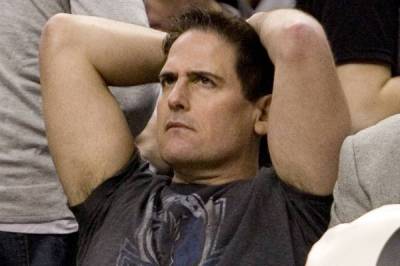 Mavs owner Mark Cuban just might be pissed off enough over losing DeAndre Jordan to help the Pacers build their roster for 2015-2016.

The silly NBA moratorium was bound to cause this level of chaos eventually.

DeAndre Jordan, a rebounding machine in his prime, was highly sought after as a free agent.  The team for whom he toiled for the first seven years of his NBA career, the Los Angeles Clippers, wanted him back.  The Dallas Mavericks wanted him too.

It was reported that Jordan didn’t like being relegated to the bottom of the list of offensive options for Clippers point guard Chris Paul, and so Jordan agreed in principle to a deal to jump to the Mavs.

That removed Indiana Pacers center Roy Hibbert from the Mavs wish list.  A trade with the Pacers to acquire Hibbert was said to be option #2 for the Mavs as they searched for bigs, so the Pacers reportedly agreed to deal Hibbert to the Lakers for something more than a bag of balls and an autographed Nick Young rookie card but less than someone who might ever play for the Pacers.

Then Jordan developed a serious case of buyer’s remorse.  Clippers owner Steve Ballmer, coach/GM Doc Rivers, and Paul flew to Houston to visit with Jordan to discuss how leaving might not be necessary.  He listened as Paul like promised him more touches, and signed as soon as the moratorium ended early this morning.

Now, the Mavs are without the big man they coveted, and might be very interested in picking up the phone to discuss the willingness to pull the trigger on the Hibbert deal they believed was unnecessary just 24 hours ago.  Maybe the Mavs would be willing to part with a real asset in exchange for the much maligned giant whose time in Indianapolis has run its course.

Or maybe the Mavs entering the bidding for Hibbert will force the Lakers to raise the ante on their end.

Or maybe, Bird goes old school, sticks to his word, and honors the deal that seemed a win-win regardless of the return when reports of the deal leaked last week.  Hibbert is no longer a player the Pacers want, and a lot of roster bandaging could be done with the $15.5M Hibbert counted against its cap.

Hibbert is slow, plodding, and ungainly.  Regardless of his ability to protect the rim, Hibbert is a liability for a team committed to playing the kind of uptempo basketball the NBA is legislating into success.  Regardless of his pros and cons as a player, the real asset being dickered over is that huge contract that will bring great flexibility to pursue free agents next offseason.  The Lakers and maps are bidding for that every bit as much as a 7’2″ center.

Cuban is furious, Ballmer is giddy, and Larry is in the cat bird’s seat with an asset he was prevented from officially dealing because of a moratorium whose most legitimate purpose is to extend media coverage of the NBA another few days into the offseason.

Negotiations occur, deals are crafted, but the contracts sit unsigned.  That leaves open the window through which Jordan has now jumped, and the dominoes continue to fall all over the NBA until the Lakers wind up without that giant contract of Hibbert’s that will come off the books next offseason along with that of the once great but decaying carcass of Kobe Bryant.

Now instead of the Pacers benefiting through addition by subtraction, the market with a pissed off Cuban seeking Hibbert might just be robust enough to bring them some addition by addition.

Business in the NBA is fascinating, and maybe that is reason enough for this silly contrivance of a moratorium to exist.